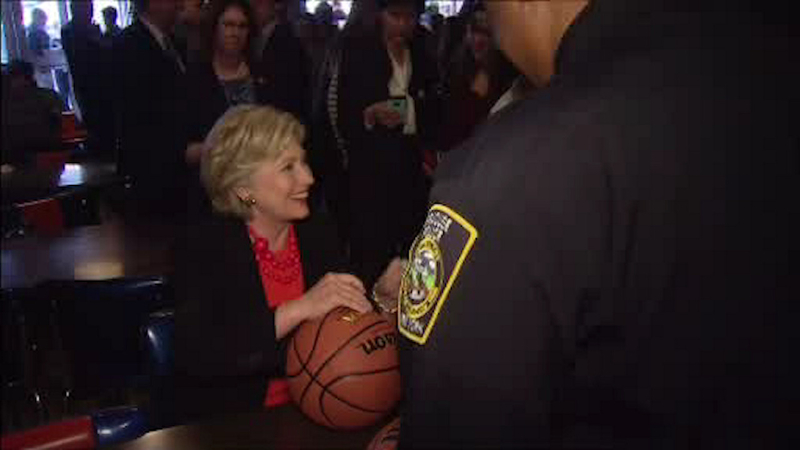 The roundtable featured actress Rosario Dawson, a vocal Sanders supporter, who also appeared with him at a rally Thursday night. During that event, Sanders told hundreds of supporters in New York City that if he wins the state's primary, he will win the White House.

The Democratic presidential candidate says voter turnout in April 19's primary could affect the trajectory of his campaign. The Empire State has 247 delegates up for grabs, the second largest haul in the primary season.

Sanders was also joined by director Spike Lee and singer Residente, who spoke of Bernie's support for women and for Puerto Rico in its debt crisis.

Sanders drew on his experience growing up in Brooklyn. He reiterated his positions on fighting income inequality, creating a single-payer healthcare system and raising the minimum wage to $15 an hour.

While Clinton stumped upstate in Syracuse ahead of a fundraiser Friday night in Tenafly, Sanders headed to in Wisconsin ahead of that state's primary on Tuesday. He is leading there.

Sanders reiterated his positions on fighting income inequality, creating a single-payer health care system and raising the minimum wage to $15 an hour.

Clinton's $10 billion manufacturing proposal centers on using federal funding to create "Make it in America Partnerships" among universities, private companies, unions and government. Businesses participating in the program would pledge not to outsource jobs or move their headquarters abroad to avoid paying U.S. taxes.

She's trying to boost support among rural and working-class voters, groups that have favored Sanders in previous primary contests.

Clinton communications director Jennifer Palmieri says in a statement that "it's disappointing that they've doubled down on negative character attacks that deliberately mislead voters rather than debate the issues."

Sanders has said Clinton should apologize for saying he's lying about her record.

But the Clinton spokeswoman says the campaign won't apologize and calls Sanders' tactics "a desperate move" from a campaign conducting "misleading attacks."