Bittles combines Gillen's love of dessert and weakness for cereal into a bite-size cereal-flavored dessert on a spoon. (Sabrina Szteinbaum)

NEW YORK (WABC) -- When Deborah Gillen started a business last August, she kept it a secret from her parents and many of her friends.

"I didn't tell anyone," she said. "I really wanted to get the recipe, the name, the whole idea and all of the information down before I told anyone."

Gillen finally told her parents about "Bittles" on Christmas, and they've become her biggest fans, posting all over Facebook in support of their daughter.

With their tagline as "Come Spoon With Us," Bittles combines Gillen's love of dessert and "weakness for cereal" into a bite-size cereal-flavored dessert on a spoon. The original idea was born from Gillen's desire to satisfy her sweet tooth without the calories and guilt that may come with a full dessert.

The 25-year-old works 9 to 5 as an executive assistant at an investment firm, leading her "second life" on nights and weekends, where she spends in the kitchen creating products. From names like "Get Lucky" to "Wham! Graham," Bittles has about 10 standard flavors, but Gillen is open to custom orders. 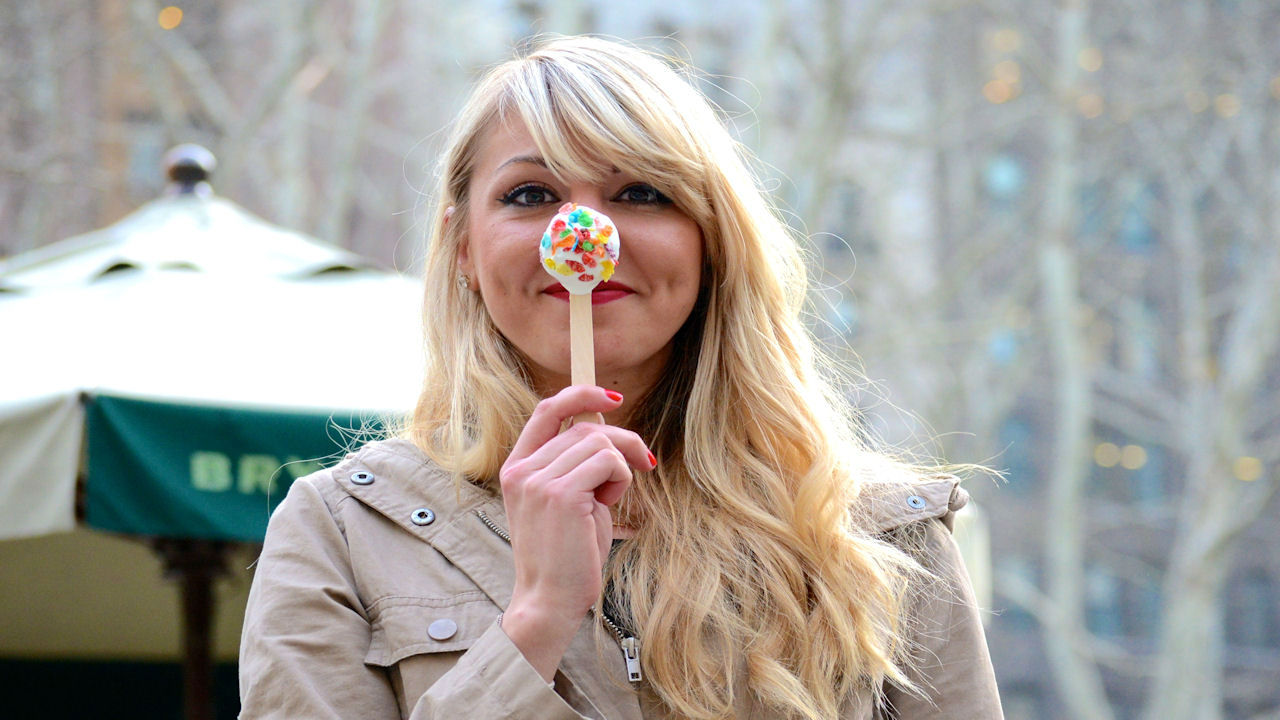 PHOTOS: 'Bittles' bite-size cereal desserts
Bittles combines Gillen's love of dessert and weakness for cereal into a bite-size cereal-flavored dessert on a spoon.
She has one friend who threw a 90s themed party and requested 200 Bittles made with popular 90s candies like Pop Rocks and Smarties, she said, and she can also make them gluten-free.

The idea for Bittles came to Gillen in high school, but she was too wary to begin the process, thinking she needed a lot of money and the right connections to be successful.

At the University of South Carolina, Gillen majored in psychology with a plan to go into psychopharmacology.

"I ended up being a vet assistant, and now I work at a finance firm, so you know, they all go hand in hand," she joked.

But the finance firm has given Gillen resources in the way of financial and legal advice to get her business started, she said.

While the idea for Bittles was stirring in her head, Gillen spent middle school and early high school baking box-mix cupcakes with her friends and selling them in lemonade stand fashion on her front lawn.

"My background in high school was baking box recipes, that's all I knew," she said. "I didn't know you were supposed to start with the wet and go to the dry, that sort of thing."

So when she started testing vanilla cake recipes, it took her from August to October and at least 10 different recipes until she was satisfied, she said. Now that she's developed her perfect cake flavors, Gillen said she has possible plans to create ice cream Bittles for the summer.

And as for the future, Gillen is wary to "go too big yet," she said. While she is dreaming of a storefront, she doesn't want to give up having such a large hand in the process for now.

"It's my baby right now," she said. "I'm not ready to be like 'here this is how you make it.' I want to be the one who is making everything, melting the chocolate (and) covering it in my decorations."
Related topics:
food & drinkfooddesserts
Copyright © 2022 WABC-TV. All Rights Reserved.
TOP STORIES
Police release photos of suspected gunman in Q train fatal shooting
3 women killed by alleged drunken driver after leaving Sweet 16 party
Boy Scout suffers minor injuries in bear attack at NY campsite
AccuWeather: Sun and clouds, breezy and cooler
MLB suspends Yanks' Donaldson for 1 game for 'Jackie' remark
19-year-old attacked by hatchet-wielding suspect in Flatiron District
Father puts 1,000 miles on his car to find specialty formula
Show More
Coast Guard, NYPD, FDNY demonstrate boating safety ahead of holiday
Last public pay phone in NYC removed from streets
Alleged scooter driver surrenders in stray bullet death of 11-year-old
Nurses, techs at NJ hospital stage strike over working conditions
15 arrested after NJ pop-up party that sparked 9 p.m. curfew
More TOP STORIES News