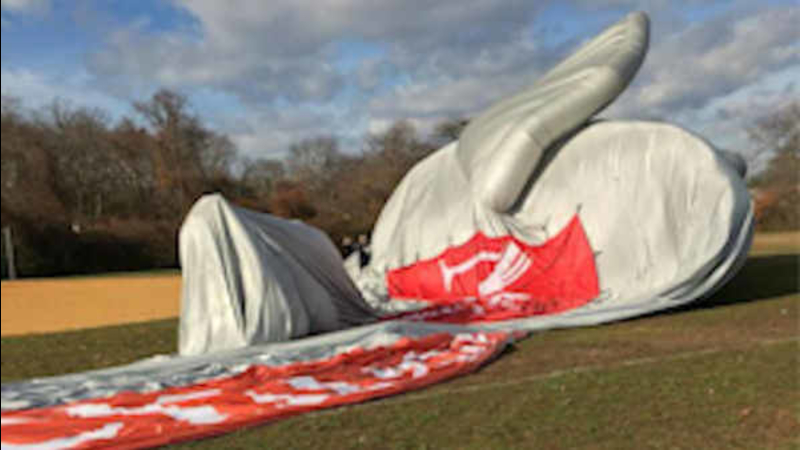 FARMINGDALE, Long Island (WABC) -- A blimp that was flying over Macy's Thanksgiving Day Parade traffic in Queens Thursday morning was forced to land behind a Long Island school when wind directions changed and the pilot realized he would not make it back to Republic Airport.

The blimp landed behind the Woodward Parkway School in South Farmingdale at around 9:45 a.m.

The pilot, Trevor Thompson, said he left Republic Airport at 7 a.m. to fly over the Long Island Expressway in Queens so people stuck in traffic heading to the parade would have something to look at.

Thompson decided to return to head back to refuel, but ran into headwinds that blew him off course. He determined that if they went any more off course, they would have run out of fuel, so he decided to make a controlled landing in an open space.

The landing was captured on camera by James Kugler of Massapequa:


After determining his first choice of a school did not have enough open space, he picked the Woodward Parkway School, where he made a successful controlled landing.

Three people were on the blimp, the pilot and two others. No one was injured.

Here's a photo of the blimp just before it came down:

The blimp was hired by the Manhattan Institute as part of a multi-media tour to promote the schoolnyc.com website over the parade.