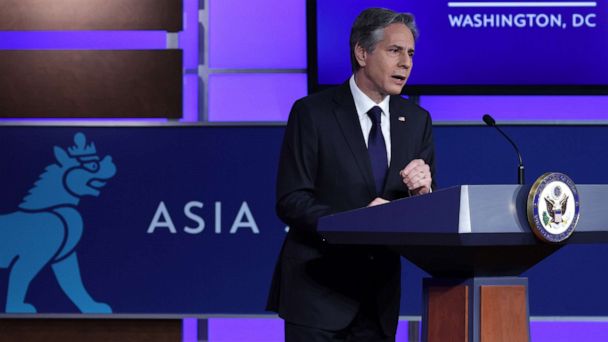 In the eyes of the Biden administration, China is a daunting rival and an ever-present risk to global security. But it's also a necessary partner for tackling some of the world's most pressing issues.

During an address laying out the president's policy towards China, Secretary of State Antony Blinken described a delicate balance between isolating and enabling the country, calling it the "most serious, long-term challenge" to the global balance.


"China is the only country with both the intent to reshape the international order and increasingly, the economic diplomatic military and technological power to do it," he said. "Beijing's vision would move us away from the universal values that have sustained so much of the world's progress over the past 75 years."

Delivered at George Washington University, his speech acknowledges that China was also a vital collaborator in the fight against climate change, pandemics and economic turmoil.

Blinken boiled the quagmire down into a single phrase.

"Put simply, the United States and China have to deal with each other for the foreseeable future," he said. "That's why this is one of the most complex and consequential relationships of any that we have in the world today."

The secretary said that while the administration was already employing strategies to curb China's influence, it would not try to limit its growth or create new Cold War. But while Blinken maintained that peace was its core goal, he vowed the U.S. would not compromise it own goals.

"Competition need not lead to conflict. We do not seek it. We will work to avoid it. But we will defend our interests against any threat," he said.

The cost of China's rise

Blinken acknowledged that China had undergone meteoric growth in the past half-century, but said its own people and other countries caught in its crosshairs had paid the price.

Blinken also noted the country's repression of freedom in Hong Kong, its brutal treatment of religious and ethnic minorities in Tibet and the Xinjiang region, and its indignation over any international criticism over draconian measures employed against its citizens.


"Beijing insists that these are somehow internal matters, that others have no right to raise. That is wrong," Blinken said.

The secretary also reaffirmed the One China policy, which was called into question earlier this week when President Biden he would defend Taiwan militarily before walking back his statements.

Blinken said the U.S. still acknowledges only one Chinese government, but said its posture towards Taiwan had intensified.

"What has changed is Beijing's growing coercion by trying to cut off Taiwan's relations with countries around the world and blocking it from participating in international organizations," he said, adding that China regularly put on shows of force by flying military aircraft near the island. "These words and actions are deeply destabilizing. They risk miscalculation and threaten the peace and stability of the Taiwan Strait."

For all its commitment to its own territorial integrity, Blinken argued China's unwavering alliance with Russia was hypocritical.

"Even while Russia was clearly mobilizing to invade Ukraine, President Xi and President Putin declared that the friendship between their countries was and I quote, without limits," he said.

Blinken repeatedly stressed that the aim of the administration was not exclude China from the world market. Instead, senior administration officials say they want to make sure it "plays by the same rules as everyone else."


"For our part, we want trade and investment as long as they're fair, and don't jeopardize our national security," he added.

He warned other countries to go into trade partnerships with open eyes, wary of retaliation should they adopt a stance China disagrees with.

"Many of our partners already had a painful experience, how Beijing can come down hard when they make choices that it dislikes," he said.

A decisive decade for the world

The secretary predicted the ideological battle between superpowers would be decided in the next 10 years.

"President Biden believes this decade will be decisive," Blinken said, outlining the administration's three pronged approach. "The Biden administration strategy can be summed up in three words, invest, align, compete."

Invest, he said, referred to invigorating industry, technology and research to ensure the U.S. was up to par with China in these arenas. Align meant strengthening ties with key allies.

Blinken said efforts to do both these things were already underway through initiatives like the Bipartisan Infrastructure Law and revived geopolitical partnerships. But to truly compete, he contended that more needed to be done -- calling on Congress to resolve a months' long stalemate and send a massive spending bill aimed at ramping up the country's ability to economically contend with China to the president's desk.

"Beijing is determined to lead, but given America's advantages, the competition is ours to lose -- not only in terms of developing new technologies, but also in shaping how they're used around the world, so that they're rooted in democratic values, not authoritarian ones," he implored.
Report a correction or typo
Related topics:
abc newsnational
Copyright © 2022 ABC News Internet Ventures.
TOP STORIES
3 shot in Queens, including off-duty correction officer, police say
Bicyclist killed in hit and run; driver fled in another car with baby
2 Long Island beaches closed after lifeguard nipped by shark
2 friends shot in cab on the way home from concert descibe incident
Security incident at JFK Terminal 4 cleared
1 killed, several injured in shooting at mechanic shop in NYC
Thousands of dead anchovies wash ashore, fall from sky in California
Show More
3 dead, 3 critically wounded in Copenhagen shopping mall shooting
Where to watch 2022 Fourth of July fireworks
Macy's 4th of July Fireworks 2022: Everything to know
No serious injuries after minor gas explosion in NYC pizzeria kitchen
AccuWeather: Mostly sunny and nice
More TOP STORIES News