Bloomberg to spend more than $37 million in historic ad buy 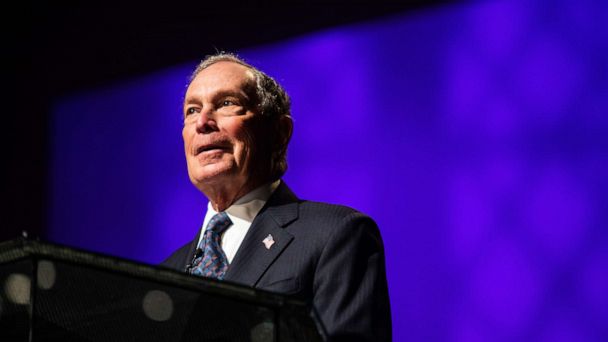 As of Friday afternoon, ad service firm CMAG confirmed to ABC News that Bloomberg is spending at least $37 million in ad buys in multiple states across the country, including California, New York, Florida, Texas and Illinois. Some of ads on national network are set to air as early as Sunday, and most other ads will run on local broadcast beginning Monday.

In those states, he is set to spend about $29.3 million in local broadcasts, including $2.3 million in New York City, $1.9 million in Los Angeles, $1.2 million in Houston, and at least $7 million on national air time. The numbers are expected to go up as more ad buy records are reported, according to CMAG, and will span 10 days.

Limited information is available on the actual ads, but according to ad buy records filed to the Federal Communications Commission, some of the local broadcast ads will be 60 seconds long and will mention President Donald Trump. Those local broadcast ads are expected to air Nov. 25 through Dec. 3.

"It's pretty remarkable that we have to look at the last week of a general election to compare with this ad buy," West told ABC News. For the primary election, this is undoubtedly the single biggest ad buy in history, West added.

Bloomberg's first ad buy already was more than half of the $50 million the entire 2020 Democratic presidential field has spent on television so far this year, according to CMAG's data. Nearly $40 million of that came from billionaire activist Tom Steyer since he entered the race in July. Democratic front-runners Sen. Bernie Sanders, I-Vt., and South Bend Mayor Pete Buttigieg have aired about $2.8 million and $2.4 million worth of television ads.

On the Republican side, Trump has spent about $4.7 million on television, which brings the total for 2020's ad spending up to about $55 million.

The ad buy swiftly triggered harsh criticism from some in the Democratic field, including Sanders, who's running on a platform targeting the country's wealthiest and the influence of money in politics.

"I'm a little old-fashioned. I believe in democracy -- one person, one vote," he said in a statement. "I'm disgusted by the idea that Michael Bloomberg or any other billionaire thinks they can circumvent the political process and spend tens of millions of dollars to buy our elections. It's just the latest example of a rigged political system that we are going to change when we're in the White House."

Sen. Amy Klobuchar, D-Minn., too, argued that voters want "something different" than "another wealthy person" occupying the White House.

"I am not going to be able to compete with the money of Bloomberg or Steyer," she said. "But I literally believe people want something different, another wealthy person in the white house."

"You can't just run ads and then go back to where you live. You've got to be out there day after day after day," she added.

A spokesperson for Bloomberg declined to comment when reached by ABC News.

The ad buy injects Bloomberg into the presidential contest, despite his team remaining adamant he has not made a final decision and is not formally a player in the race, just yet.

But Bloomberg continues to inch closer towards a formal announcement and is expected to self-fund his presidential campaign.

His wait-and-see approach isn't stopping him from pouring millions into the 2020 race. Digital ads targeting Trump for his behavior, such as his "tantrums" and "lies," started running on Facebook recently.

While the ads -- part of a staggering $100 million digital ad blitz first reported by the New York Times -- don't feature Bloomberg, they showed the disclaimer "paid for by Mike Bloomberg 2020" and directed users to a sign-up page that urges them to "join the fight."

Bloomberg also plans to spend between an estimated $15 million and $20 million on a voter registration effort to challenge President Trump in five key battlegrounds that could define the outcome of next year's election.

Following his $100 million digital campaign targeting Trump's behavior, a spokesperson for Bloomberg confirms that the former mayor of New York City will roll out a new push to register half a million Democratically-leaning, minority and underrepresented voters, including African Americans, Latinos, Asians, rural Americans and the youth voting bloc, in early 2020 .

The new drive will kick off across Arizona, Michigan, North Carolina, Texas and Wisconsin but could expand into other states.