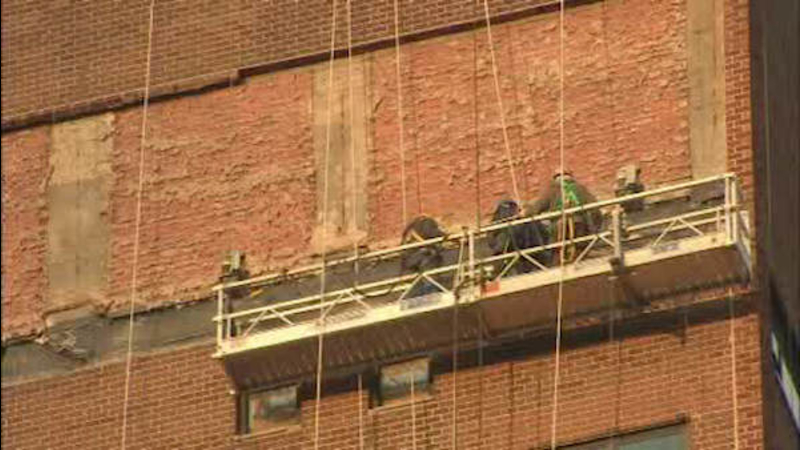 UPPER EAST SIDE, Manhattan (WABC) -- There was a controlled dismantling of more bricks Wednesday from the facade of the Upper East Side building where bricks fell to the street below Monday night.

The NYPD tweeted a notice to residents in the neighborhood not to be alarmed:

Don't be alarmed- There will be controlled dismantling of more bricks from facade of 63 St bldg #UpperEastSide #UES pic.twitter.com/XYuVfB9hFM

Businesses on First Avenue, between 62nd to 64th Streets, were told to close at 10 a.m. but were allowed to re-open by Wednesday night.

The NYPD put in place a "complete pedestrian and vehicle freeze" on First Avenue between 62nd and 64th Streets while the Buildings Department stabilizes the structure of area businesses.

Project engineers are inspecting the bricks and assessing the stability of the facade.

On Tuesday, the Buildings Department issued a violation and ordered changes at the construction site after hundreds of bricks fell.

Until those changes are made, First Avenue between 59th and 64th streets remains closed. 64th Street between First and Second Avenue also was closed. Police have been at the scene directing traffic.

Workers spent Tuesday night assembling protective scaffolding across the street from the building where the bricks had fallen.

1st Ave between E. 60th & 65th remains closed after a large collapse on a high rise building on the UES. @ABC7NY pic.twitter.com/CUgFefhums

The bricks fell from 340 E. 64th St., at First Avenue just before 10 p.m. Monday. The building is currently under construction and there is scaffolding in place. No one was injured.

The bricks coated the sidewalks and roadway between 63rd and 64th streets. A taxicab's windows were smashed out by the bricks.

Some people reported hearing some kind of explosion, but no explosion was confirmed by authorities. Authorities said the sound likely was the bricks hitting the pavement and street. 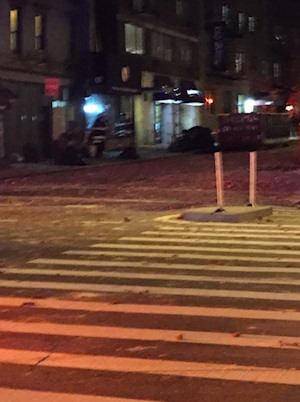 A 10x10 foot section of brick fell from the 35-story high-rise building from the 32nd floor. All day long on Tuesday, people stopped on the sidewalks nearby to look up at the area where the bricks had fallen from.

FDNY, EMS and NYPD all responded to the scene.

The Buildings Department is investigating to try to figure out what caused the bricks to fall.

"Thank God that nobody was hurt and that's the most important thing," said Dr. Romana Farrington, who lives in the block-wide co-op building. But on the 64th Street side, she and others in the neighborhood feared the worst had happened.

"I just heard unbelievable noise. it was like a blast from some bomb or something like that," said Dr. Farrington.

Frightened pedestrians running and flecks of debris can be seen on a local security camera, but no injuries, just the bashed-in rear window of the yellow cab.

The city has issued a violation for failure to safeguard the site to the contractor that was already working on facade repairs at the building, Quality Building Construction of Long Island City.