Broadway's back: Curtain Up Festival begins as 2 more shows debut

Broadway's biggest hits are back!
WABC 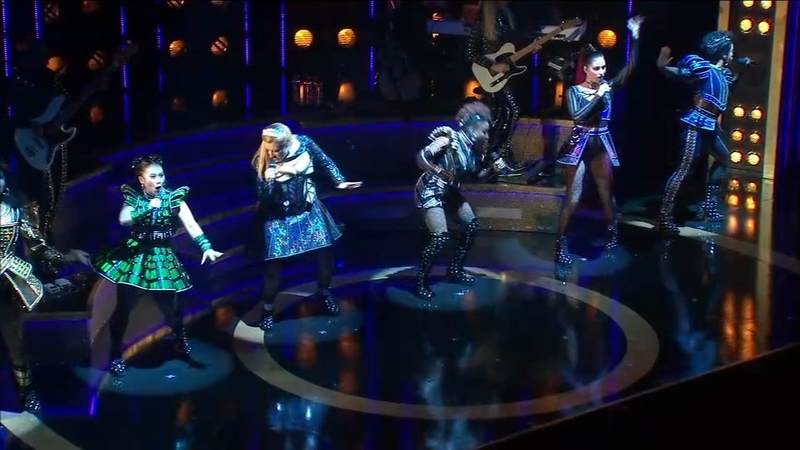 MIDTOWN, Manhattan (WABC) -- Broadway continues to spring back to life, as two more shows opened on the Great White Way Friday along with the launch of a three-day outdoor event in Times Square to celebrate the industry's comeback.

There was a remembrance under all the joy of the bright lights -- a tribute to Nick Cordero, a member of the original Broadway company of Waitress, whose unsuccessful fight with COVID last year shocked the world and the nation.

Friday would have been his 43rd birthday.

Four of the biggest musicals of all time opened earlier this week, with The Lion King, Hamilton, Wicked and Chicago welcoming back audiences -- this time fully vaccinated and wearing masks.

Hadestown re-opened on Broadway on Thursday night after a 17-month-long pandemic shutdown that brought darkness and solitude to Midtown.

To celebrate, Playbill -- in partnership with The Broadway League, the Times Square Alliance, and title sponsor Prudential -- is hosting the Curtain Up! Festival, with 22 unique events taking place on stages in Duffy Square and between 45th and 46th streets.

Broadway star Jelani Alladin will host "Curtain Up: This is Broadway!" on Sunday to mark the culmination of the festival. The concert will spotlight marquee talent from returning and new Broadway productions, trumpeting the message that "Broadway is back."

The concert will celebrate all of Broadway and the re-opening of New York City.

Current shows and performers participating include 18 Broadway musicals: Ain't Too Proud - The Life and Times of The Temptations, Aladdin, Caroline, or Change, Chicago, Come From Away, Company, Dear Evan Hansen, Diana the Musical, Girl from the North Country, Hadestown, Jagged Little Pill, The Lion King, Mrs. Doubtfire, The Phantom of the Opera, Six, Tina- The Tina Turner Musical, Waitress, and Wicked.

It also features five Broadway plays: Harry Potter and the Cursed Child, Lackawanna Blues, Pass Over, Thoughts of a Colored Man, and To Kill A Mockingbird.

Jim Dolan has more on the film about how Broadway has overcome challenges over time.

The other headlining events taking place during this three-day celebration include:

--The Curtain Up! Kick-Off Event on Friday, September 17 at noon hosted by Chicken & Biscuits stars Norm Lewis and Michael Urie. The event will feature speakers from Playbill, The Broadway League, and Times Square Alliance, with special guest speakers Senate Majority Leader Charles Schumer, Deputy Mayor Vicki Been and Commissioner Anne Del Castillo of the NYC Mayor's Office of Media and Entertainment. Special performances will be part of the event by Brian Stokes Mitchell and Jessica Vosk, with music director John McDaniel. The event will ignite excitement on the mainstage and include a celebratory countdown to the official event start.

--The Black to Broadway - It's "Play" Time panel event will take place on Saturday, September 18, at 12:15 p.m. in Duffy Square. As Broadway performances resume following the global pandemic and social reckoning that have taken place over the past 18 months, no less than seven new productions of plays by Black writers are slated to open this fal, including four by Black women. The live conversation will give the theatergoing public a chance to get to know some of the writers of these plays. Panelists include Keenan Scott III (Thoughts of a Colored Man), Antoinette Chinonye Nwandu (Pass Over), Lynn Nottage (Clyde's) and Douglas Lyons (Chicken & Biscuits) moderated by Harriette Cole, the nationally renowned lifestylist, and branding coach and DREAMLEAPERS founder.

--The ¡Viva! Broadway When We See Ourselves concert will take place on Saturday, September 18, at 5 p.m. in Duffy Square, a musical celebration of the joy, diversity, and extensive contributions of the Latin and Hispanic Broadway. The free concert will lift up the incredible history Broadway Latinx artists have shared throughout the decades and invite audiences to join in the continued work that lies ahead. The event will celebrate some of the most familiar names of Latinx representation on Broadway such as Daphne Rubin-Vega, Robin de Jesús, Bianca Marroquín, and more, and elevate the talented ensemble members who always lead the way. The creative team includes Luis Salgado (director and choreographer), Gabriela Garcia (associate director/choreographer), Eric Ulloa (writer), Jaime Lozano (musical direction) and Sergio Trujillo (creative consultant).

All details for Curtain Up! can be found at Playbill.com/CurtainUp.

The first Broadway shows to resume production were Springsteen on Broadway (which ran through September 4), Pass Over, Hadestown, and Waitress, and more will re-open in the next few weeks.

Aladdin is the final show reopening this month, set to resume on September 28.

Here is a list of all the shows reopening this fall and continuing into 2022:

Opening date: Sept. 21, 2021
"Come From Away" will reopen at the Gerald Schoenfeld Theatre on Sept. 21, with regular performances scheduled through June 2022. The musical is based on the true story of 7,000 passengers who found themselves stranded in Gander, Newfoundland, after their planes were diverted.

Opening date: Sept. 24, 2021
"Moulin Rouge! The Musical" will officially reopen at the Al Hirschfeld Theatre on Sept. 24, though there will be a special dress rehearsal on Sept. 23 to honor front-line workers. The musical is a stage adaptation of Baz Luhrmann's 2001 movie by the same name.

Opening date: Sept. 28, 2021
"Aladdin" will reopen at the New Amsterdam Theatre on Sept. 28, with regular performances scheduled through August 2022. The musical follows the Disney movie by the same name, in which Princess Jasmine wants to experience more than typical royal life, Jafar plans to take over the throne, and both meet Aladdin, who shakes up the status quo.

Opening date: Sept. 28, 2021
"Lackawanna Blues" will open on Sept. 28 at the Samuel J. Friedman Theatre -- though previews will start on Sept. 14. The solo play is written, directed, and performed by Ruben Santiago-Hudson, and is all about a woman named Miss Rachel, who raised him.

Oct. 3, 2021
After having its opening night rescheduled due to the pandemic, "Six" will open on Oct. 3 at the Brooks Atkinson Theatre -- though previews will start on Sept. 17, and regular performances are scheduled through March 2022. The musical follows Henry VIII's six wives and their stories.

To Kill a Mockingbird

Opening date: Oct. 5, 2021
"To Kill a Mockingbird" will reopen at the Shubert Theatre on Oct. 5, with regular performances scheduled through February 2022. The play is a stage adaptation of the novel by Harper Lee.

Opening date: Oct. 8, 2021
"Tina" will reopen at the Lunt-Fontanne Theatre on Oct. 8. The musical details the famous singer's history, from her early life to her current status as a rock icon.

Ain't Too Proud: The Life and Times of The Temptations

Opening date: Oct. 16, 2021
"Ain't Too Proud" will reopen at the Imperial Theatre on Oct. 16, with regular performances scheduled through July 2022. The musical tells the story of Motown group The Temptations, from their beginnings to the Hall of Fame.

Opening date: Oct. 21, 2021
"Jagged Little Pill" will reopen at the Broadhurst Theatre on Oct. 21, with regular performances scheduled through July 2022. The musical is based on singer Alanis Morissette's music.

The Phantom of the Opera

Opening date: Oct. 22, 2021
"The Phantom of the Opera" will reopen at the Majestic Theatre on Oct. 22, with regular performances scheduled through March 2022. Broadway's longest-running show, the musical is based on a 1910 horror book by Gaston Leroux, and is about a masked figure that haunts the Paris Opera House.

Opening date: Oct. 27, 2021
Previews for "Caroline, or Change" were initially scheduled for March 2020, but were pushed due to the pandemic. The musical will now have its opening night on Oct. 27 at Studio 54, with previews beginning on Oct. 8. It follows a Black maid working for a Jewish family in 1963 Louisiana.

Opening date: Nov. 17, 2021
"Diana" will open at the Longacre Theatre on Nov. 17, though previews will start on Nov. 2; regular performances are scheduled through November 2022. The musical follows the late Princess of Wales' life and legacy.

Opening date: Nov. 18, 2021
"Trouble in Mind" will open for the first time at the American Airlines Theatre on Nov. 18, though previews will start on Oct. 29. The play follows Wiletta Mayer, a Black actress who is continually typecast due to the color of her skin, as she gears up for a play that discusses racism in the U.S.

Opening date: Dec. 5, 2021
"Mrs. Doubtfire" will open at the Stephen Sondheim Theatre on Dec. 5, though previews will start on Oct. 21; regular performances are scheduled through May 2022. The musical will adapt the 1993 movie for the stage, and follow the same story of an actor who dresses up as a nanny to stay in his children's lives.

Opening date: Dec. 6, 2021
"Flying Over Sunset" will open at the Vivian Beaumont Theater on Dec. 6, though previews will begin on Nov. 4. Set in 1950s Hollywood, the musical follows Cary Grant, Clare Boothe Luce and Aldous Huxley as they experiment with LSD.

Opening date: Dec. 11, 2021
"Dear Evan Hansen" will reopen at the Music Box Theatre on Dec. 11, with regular performances scheduled through June 2022. The musical follows the titular character, Evan Hansen, as he goes through life and writes letters to himself along the way.

Opening date: Jan. 9, 2022
"Company" will open at the Bernard B. Jacobs Theatre on Jan. 9 of next year, though previews will start on Dec. 20; regular performances are scheduled through June 2022. The musical follows Bobbie as she navigates love in New York City.

Opening date: Feb. 1, 2022
"MJ" will open at the Neil Simon Theatre on Feb. 1 of next year, though previews will begin on Dec. 6. The musical is based around Michael Jackson's life and will reintroduce audiences to the King of Pop.

Visit ThisIsBroadway.org to find a comprehensive overview of what's playing on Broadway.