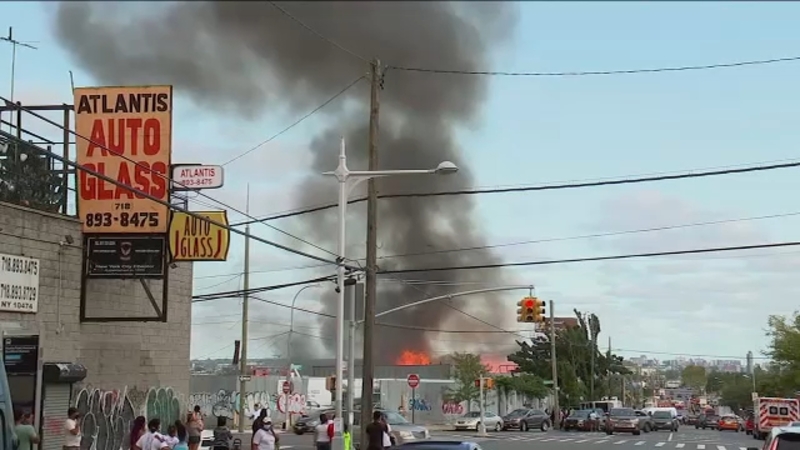 HUNTS POINT, The Bronx (WABC) -- Fire marshals are investigating after a 5-alarm fire at a salvageyard in the Bronx Monday that firefighters deemed suspicious.

Firefighters say a call came in around 4:25 p.m. for a fire at the auto salvage yard on Drake Avenue in Hunts Point.

Firefighters responded within five minutes and encountered heavy flames that had engulfed several vehicles as well as a cache of wooden pallets.

The fire eventually spread to the entire salvage yard and to an adjoining produce warehouse.

"It's a tough fire because of the size of the yard and the amount of radiant heat that the units encountered. If you look at the surrounding streets a number of cars were set on fire by the radiant heat. So the units had to essentially fight their way into the block because of the amount of heat that was present," FDNY Bureau of Operations Assistant Chief Richard Blatus said.

It took 198 firefighters a little over two hours to bring the massive fire under control.

Specialty units including tower ladders and a high capacity water unit were brought in order to quickly douse the flames with a high volume of water.

Seven firefighters were injured, five of them minor, but two suffered serious, but not life threatening injuries.

Blatus said firefighters deemed the fire suspicious and fire marshals will determine if the fire was set intentionally.