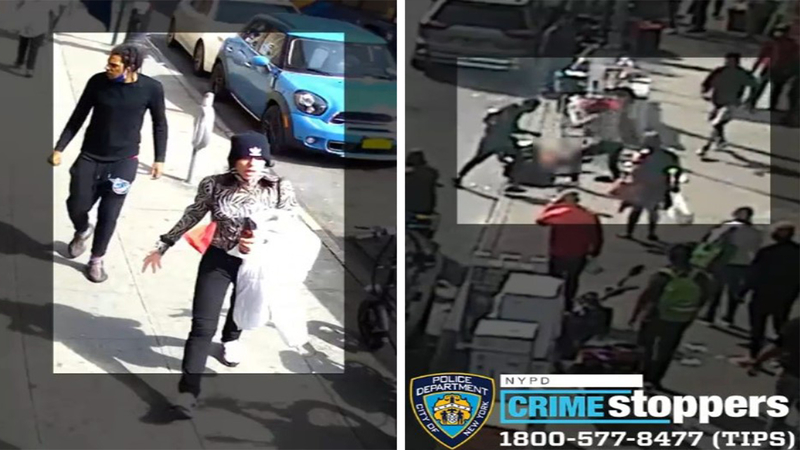 MOUNT EDEN, Bronx (WABC) -- Police have released video of man and woman wanted for attacking an on-duty bus operator in the Bronx.

The incident took place on May 5 just after 4 p.m. in the Mount Eden section of the Bronx.

Police said an unidentified man and woman walked up to a BX18 bus that was between stops and knocked on the doors to try and board.

When the victim, an on-duty MTA bus operator, did not open the doors, the suspects chased the bus to the next stop on East 17th Street and Walton Avenue.

The female suspect then boarded the bus and threw an unknown liquid on the driver's face.

Police said the victim got off the bus and was knocked to the ground by the suspects, who proceeded to kick and punch her.

The suspects fled on foot. Meanwhile, the victim suffered pain and swelling to her face and body and bruises to her knees.
She was taken to BronxCare Health System in stable condition.

Police released surveillance video of the suspects, which captured them walking ahead of the bus just before the attack.


Anyone with information in regard to this incident is asked to call the NYPD's Crime Stoppers Hotline at 1-800-577-TIPS (8477) or for Spanish, 1-888-57-PISTA (74782). The public can also submit their tips by logging onto the Crime Stoppers website at WWW.NYPDCRIMESTOPPERS.COM, or on Twitter @NYPDTips.