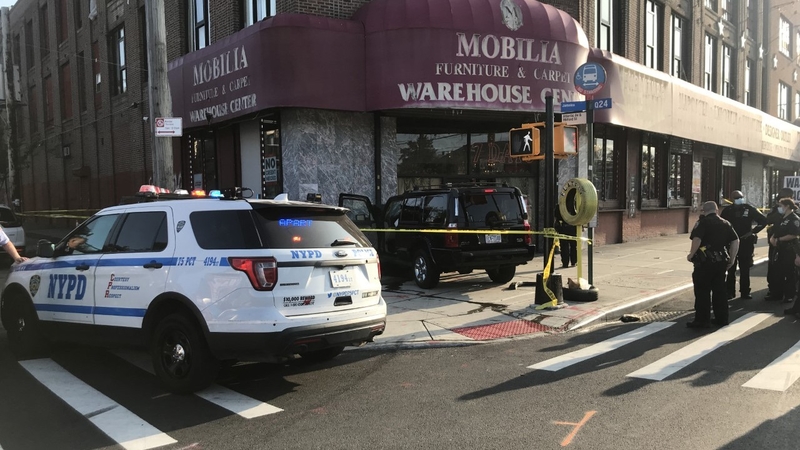 CYPRESS HILLS, Brooklyn (WABC) -- A pedestrian was struck and killed by an out-of-control car that slammed into a building in Brooklyn.

Officials say a black SUV jumped the curb at Atlantic Avenue and Milford Street in the Cypress Hills section of Brooklyn Friday afternoon.

They say the black Jeep 4 X 4 ran over a male victim and then slammed into the front of a furniture and carpet store.

Sources say the victim was just an innocent bystander at the bus stop moments before that SUV barreled into him and crushed him underneath.

A car exiting a highway in Queens flipped over and struck parked cars before ending up against the side of a home late Friday morning, and the driver fled the scene leaving two inj

The victim was pronounced dead at the scene.

NYPD sources say the driver was coming out of the Formula 3 Brooklyn car wash next door. They say it's unclear how the car ended up on the sidewalk.

Witness Francisco Rodriguez says he couldn't believe his eyes as the car pulled out of the car wash on Atlantic Avenue. He says he noticed the jeep and knew something was wrong.

"The guy who was driving it, couldn't control that car it was going so fast," Rodriguez said.

While NewsCopter7 was over the scene, detectives were on the ground reconstructing the crash.

NYPD sources say the driver was found in the passenger side of the SUV after being thrown from the impact. They say he was not wearing a seatbelt.

Sources say the driver of that car was an employee at the car wash, and as he pulled out at the corner of Milford Street he lost control.

The driver of the vehicle was taken to the hospital.

RELATED | Pedestrian, cyclist deaths down in NYC, NYPD data shows, but it may not last
EMBED More News Videos

The owner of the Jeep was not the driver in the car at the time of the crash.

The owner says she dropped off the car for a car wash.

It's not known if the car had been washed or if it was being moved to make room for other cars.