Anti-violence march held after 12 shot at playground in Brownsville 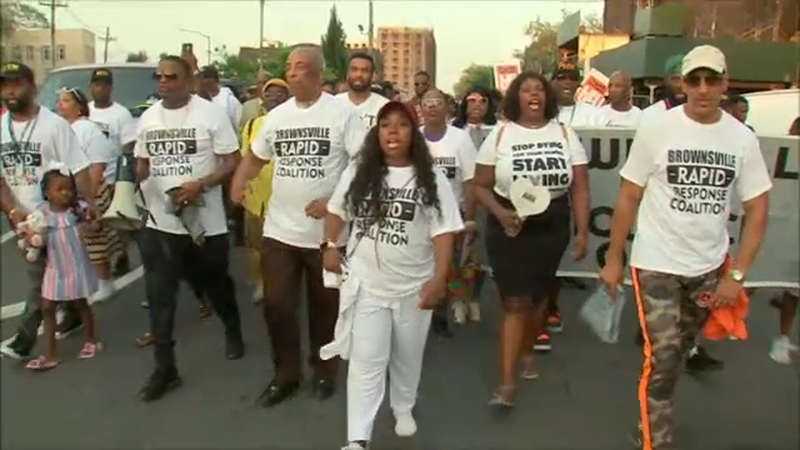 BROWNSVILLE, Brooklyn (WABC) -- A march was held in Brooklyn Monday night following the weekend shooting at a playground that left one person dead and 11 others injured.

The gunfire broke out late Saturday night toward the end of an annual community celebration in Brownsville, the Old Timers Event.

Police continue to search for at least two gunmen believed to have been involved.

Community leaders and residents convened at the site of the festival for an anti-violence march.

A crowd, some in T-shirts honoring the Old Timers Day tradition, marched through nearby streets in a procession that stretched for multiple blocks.

"Brownsville in, violence out!" some chanted.

"I'm livid. I'm livid of the killing," said Marie Delus, the aunt of a shooting victim.

Adams has seen much of Brooklyn turn around in the past two decades, but he describes stubborn crevices of crime that persist, where he says police are only part of the answer.

"We need to go into these communities and help people turn it around," said Adams. "Help people come out of gangs. Get folks jobs."

Several victims of the shooting late Saturday had gang histories, including the man who was killed, NYPD Chief of Detectives Dermot Shea said. But "whether or not that played any role" has not been determined, Shea said.

NYPD Commissioner James O'Neill said police are looking at the possibility of gang involvement, in part because gang violence accounts for about half the shootings in that area of the city.

Six men and five women between ages 21 and 55 were hospitalized with gunshot wounds. One person who was listed in critical condition is now in serious condition, Shea said.

Asked at a news conference Monday how many suspects were being sought, Shea said police "will look for as many as were involved," adding that authorities have received several tips from community members.

The man killed was identified as 38-year-old Jason Pagan and the investigation into the shooting has focused on his criminal history.