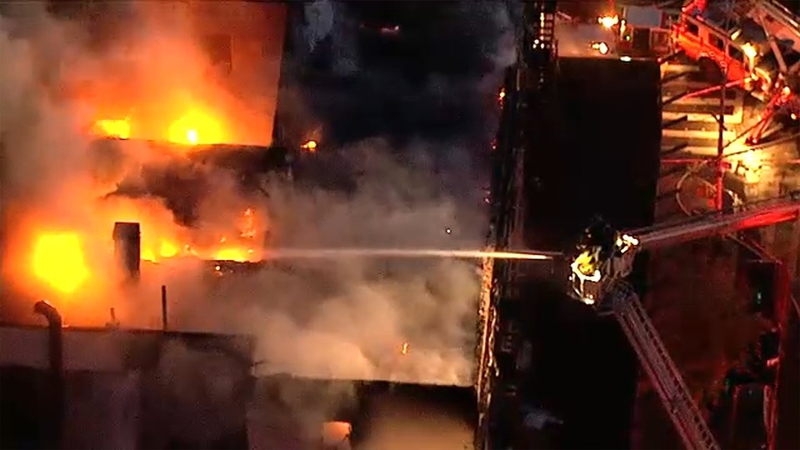 The building has stores on the first floor and 42 apartments on floors two through six.

"A big fire coming from my building and onto Broadway and people were hysterical and that's where it all started," said John Farias, a resident.

More than 250 firefighters responded to the scene where high winds made the fire more difficult to put out.

Here's intense video showing the fire shortly after it started, including black smoke that could be seen for miles:
EMBED More News Videos

"There were plenty of people in the building," Taverez said. "I helped some elderly people get out with their pets and their family members."

The wind gusts over 20 miles an hour quickly fueled the fire as it chewed through the room and into the other sixth floor apartments.

"It drove us off the top floor and contributed to the rapid fire spread throughout the top floor," FDNY Chief of Department James Leonard said.

Residents in neighboring buildings were forced out due to the heavy smoke condition on West 144th St.

"We just saw flames," said Sophia Boswell, a resident. "We took the children and left and are monitoring the situation, and worried about the wind and flames jumping from building to building."

From Newscopter 7, firefighters were seen attacking the blaze with as many as four ladder towers shooting streams of water down on the fire, which burned down into the fifth floor apartments.

"The entire top floor is heavily involved, it is still a very active fire scene," Leonard said. "A lot of the roof is burned away and we still have very heavy fire and smoke."

A tenant who lived in the building describes the loss:
EMBED More News Videos

A tenant of the building on fire in Hamilton Heights describes how he has lost all of his belongings.

There was also the potential for collapse and the fire burned down through other floors of the 100-year-old building.

"She's like, 'Hey, our apartment building is on fire,' and she actually managed to grab my cat, thank God," Carlberg said.

The Red Cross is currently assisting 22 families, and will help them find a hotel.

PS 153 at 1750 Amsterdam Ave. is set up as a reception center for residents to get aid, hot meal and information.