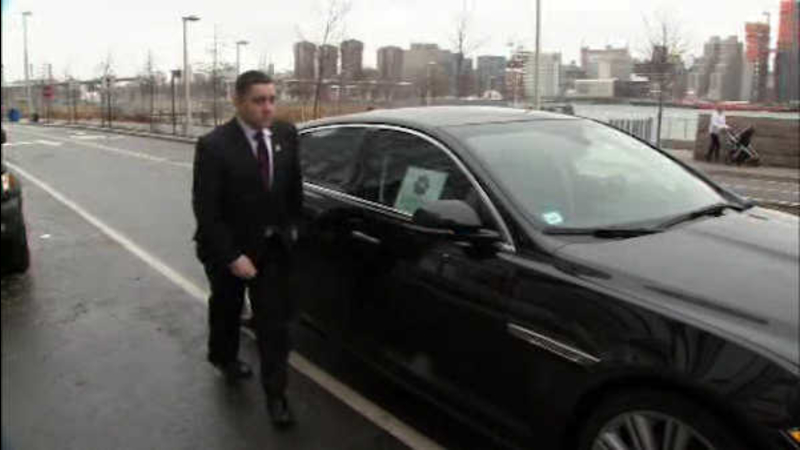 NEW YORK (WABC) -- War veterans know that finding work after serving in the military can be a challenge.

But one company is exclusively hiring vets. The founder says their skills are well-suited, and that vets have a lot to offer.

A veteran's resume may list job skills that most companies can't relate to, like tank commander, fighter pilot, weapons transporter.

But there's a new company that's banking on those skills and believes they can translate to the corporate world.

"I drove 5 ton to 10 ton vehicles," said Bolivar Flores, who drove those vehicles through southern Afghanistan and Iraq.

"Transporting weapons, ammo, food, heavy equipment," he said. But these days, he's behind the wheel of a Jaguar. "The steering wheel is heated," he said.

Driving movers and shakers throughout the city for a startup company called Capstar.

"Capstar isn't just a job, it's an opportunity," he said.

The company launched in London three years ago, with the goal of employing military veterans.

"We see this as the launch pad for bigger and better things," said Capstar's Casey Martinez.

Casey had offers from finance firms when she left the military, but decided to head up Capstar's American venture.

Not all veterans have such an easy time of finding work after serving and Capstar hopes to make the transition easier.

"It's sort of like a virtuous circle. The better we do the more people we can hire, the more our management team grows and we can have people move up within our own company or the person in the back seat thinks they're the best thing since sliced bread and must have them on their team," Casey said.

Capstar offers an elegant service, not a commodity like a taxi or Uber.

"When you have an ex soldier or sailor that turns up to to drive, you know that they will have done their route recon the night before, they'll be there 30 minutes early, their uniform will be impeccable, the car will be spotless, they'll be polite, discreet, reliable, all the things you want in that service," said Casey.

Bolivar joined the Marines at 17 and was medically discharged at 24.

Until Capstar he struggled finding a job, but now he's looking forward to the future.

"One day i can be in the back of the seat of the Jaguar instead of driving it and that's the kind of hope i have now that I've been able to work with Capstar," he said.

"If a veteran shows up with a resume that says tank commander that doesn't compute for Corporate America," said Martinez. "But what does translate are the skills and values they've learned in the military, which are integrity, discipline, loyalty, resourcefulness, teamwork, adaptability, And those are really important things that are more difficult to teach

Capstar currently has a fleet of a dozen cars, and it plans to eventually offer security as well as drivers.