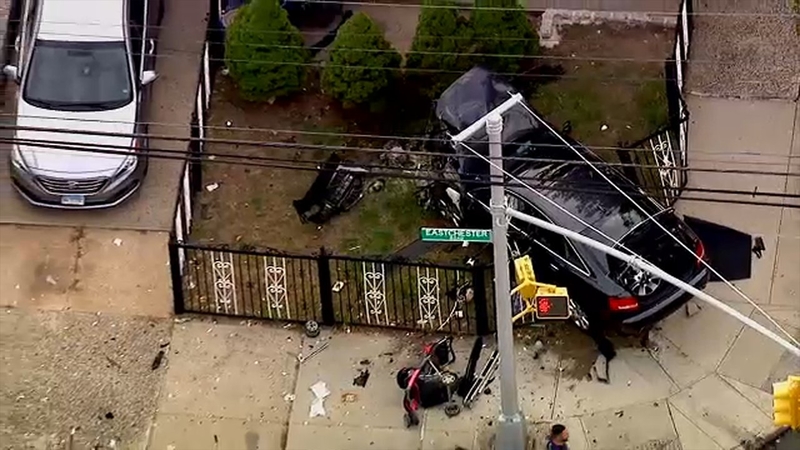 BAYCHESTER, Bronx (WABC) -- Five people were injured when two cars collided, sending one of them careening onto the sidewalk and through the fence of a home's front yard in the Bronx.

It happened at Eastchester and Givan avenues around 5 p.m. in the Baychester section.

Robinson flew up from Florida to celebrate her sister's birthday Tuesday night. It was 5 o'clock.

The extended family had gathered around the table when they were jolted by a punishing crash outside.

"We heard a boom like an airplane and we all jumped looked out there," Robinson said.

"I saw the black Audi coming in the yard. Guy with a baby running from corner. The white Honda was sitting there," said Dwight Downer, a resident.

The two-car accident happened at the intersection of Givan and Eastchester. A man was walking holding a baby with one arm and pushing a stroller with his other. Amazingly, was able to run out of harm's way. Residents credit his quick reaction for this situation not turning into a tragedy.

"All I saw was the man dashing away with the baby in his hands," Downer said. "He would've been hit if he didn't move fast."

"Just a little blood on the baby's face," Robinson said.

Neighbors complain that the intersection is a danger zone. This family says they used to have to replace their fence at least once a year because of accidents.

Finally, a light was installed, but it's still not perfect. Just a few days ago, there was another wreck at this very same spot.

"People don't know how to slow down. People are in a hurry to go nowhere," Downer said.