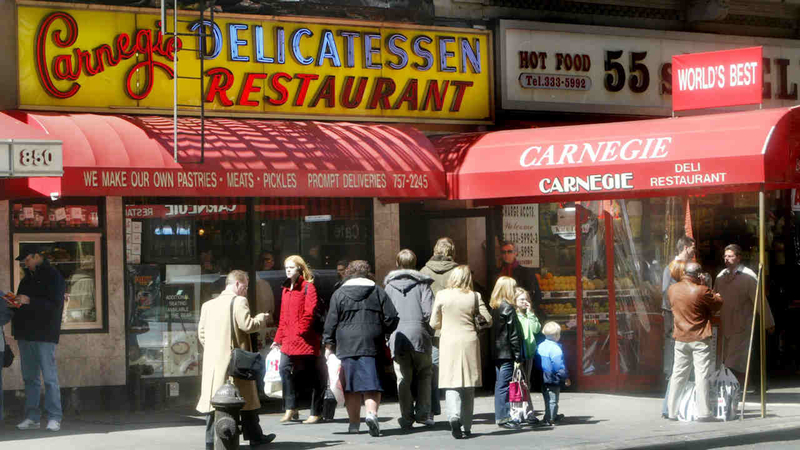 MIDTOWN, Manhattan (WABC) -- The clock wound down for last call at the iconic Carnegie Deli in Midtown.

Around lunchtime -- when there were still 12 hours left until the deli closed for good -- the wait to get in was between 2 and 5 hours.

The famous shop closed its doors at midnight after 79 years of serving up heaps of cured meat. Restaurant owner Marian Harper-Levine said her long hours at the deli have taken a toll, and now, she wants to enjoy her life.

A handful of people demonstrated to save the deli outside the Seventh Avenue eatery in the morning, including one man who claimed he was once a waiter there.

"I initially made an offer," restaurant owner Sammy Mussovic said. "I'm hoping to save this institution."

But Cristyne Nicholas, spokesperson for the Carnegie Deli, said the restaurant is not for sale.

Harper-Levine told her staff in October that she would keep the deli open until Dec. 31 so they could make tips through the busy holiday season.

The iconic Carnegie Deli is closing at the end of the year.

Harper-Levine's family has owned the Carnegie Deli since 1976. It opened in 1937.

The deli was closed for nine months in 2015 over an illegal gas hookup. It reopened last February with a ceremony involving Mayor Bill de Blasio.

The owner will continue to license Carnegie Deli restaurants in other cities, like Las Vegas and Bethlehem, Pa., and hopes the flagship location can reopen in the future under a similar arrangement.

"Along with my daughter Sarri and in honor of my late father Milton, I would like to sincerely thank all of our loyal patrons, - tourists, dignitaries, and New Yorkers alike - who have visited Carnegie Deli over the past 80 years. Since my father took over the Deli in 1976, this has been a second home to me and it has been a true privilege and an honor to serve you. Although this has been an incredibly difficult decision to officially close Carnegie Deli New York (854 7th Avenue) tonight at midnight, we thank you for your letters, notes, visits and sharing your stories. The Carnegie Deli looks forward to expanding wholesale and retail operations and welcoming you to the other licensed locations at Madison Square Garden, The Mirage in Las Vegas, NV, Sands Casino Resort in Bethlehem, PA and during the US Open Tennis Championships in Flushing, Queens. Our family-owned and operated meat processing facility and bakery in New Jersey will continue Carnegie Deli's celebrated legacy, by supplying the other locations and selling select products and merchandise directly to the public online at CarnegieDeli.com. Thank you again and we wish you all a very Happy, Healthy and Peaceful New Year!"
Related topics:
businessmidtownnew york citybusinessfoodstore closingnew york news
Copyright © 2022 WABC-TV. All Rights Reserved.
TOP STORIES
Man fatally shot while riding Q train into Manhattan
3 people killed in crash near catering hall on Long Island
Body of teen who disappeared while swimming in NJ reservoir found
Something strange is happening with our universe: NASA
NYPD searching for man behind Harlem stabbing
AccuWeather: Cooler start to the week
Buffalo mass shooting victims laid to rest one week after tragedy
Show More
Israeli flags fill Upper East Side for 'Celebrate Israel' Parade
78,000 pounds of infant formula arrives in US
NJ police impose curfew after large party gets out of hand
Suspect breaks into NYC apartment, stabs man to death
Empire State Building lit to honor Notorious B.I.G.'s 50th birthday
More TOP STORIES News