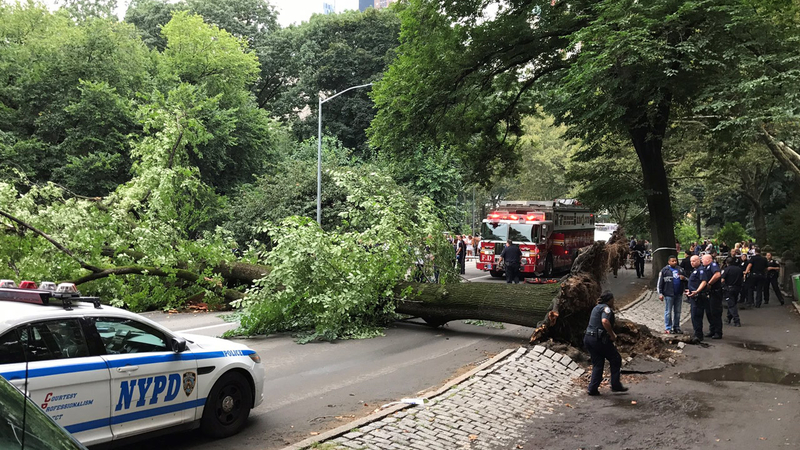 The FDNY said the tree fell near Central Park West and West 62nd Street at about 10:01 a.m.

Four mounted police in the area heard the crack of the tree and watched it fall, and then saw people running toward the scene. They quickly followed.

They found the 39-year-old woman trapped under the tree by branches. She had been struck in the head, but officers said she was alert by the time they arrived and kept asking what happened.

N.J. Burkett has the details on the family injured when a tree fell in Central Park.

Anne Monoky Goldman, a resident of Midtown, was taken to the hospital in critical condition but has since been upgraded to stable condition, and is expected to survive.

According to her family, she has a fractured vertebrae and is undergoing more testing.

Officers said the woman had her 3 young sons with her. A 4-year-old and a 2-year-old in a stroller and a baby on a bjorn.

The children were all taken to the hospital. The 2-year-old suffered a fractured skull.

The other children had facial bruises.

"She was lying on her back, the stroller was off a couple of feet in front of her, that was also twisted up in the branches," said Joseph Tomeo of the NYPD Mounted Unit.

"It's a little more emotional when children are involved, especially since a lot of us have children of our own. I have a son the same age as the 2 year old, so it was definitely heart-breaking to see this," mounted police officer Megan O'Leary said.

An eyewitness said the woman lost consciousness for a few minutes and then regained consciousness. The children were crying, but appeared to be OK.

"Crews have mobilized immediately to clear the tree and investigate the incident," the NYC parks department said in a statement.

Video and photos from Eyewitness News viewers and reporters

The tree was at least 75-feet tall. Its trunk was at least three feet in diameter. What caused it to topple over was still not clear.

On average, 100,000 people enjoy the 26,000 trees in the park each day. "When you saw it upended today, the roots didn't seem all that deep, fairly shallow and that's not good," said Geoffrey Croft, the executive director of NYC Park Advocates.

He says that tree falls are rare. And he says they are inspected using a GPS designation, to track any maintenance or the last time the tree was inspected.

The trees are maintained by the Central Park Conservancy, which released a statement that read in part:
"The American elm that fell across the West Drive at 62nd Street uprooted as a result of decay in the root system beneath the surrounding pavement. The tree had been inspected annually over the last six years, most recently in November 2016, and there were no visible signs of decay or disease. The Conservancy employs tree crews seven days a week who regularly inspect and maintain Central Park's nearly 20,000 trees according to industry standards. The safety of all 42 million annual visitors is our number one priority in the management of Central Park in partnership with NYC Parks."
Report a correction or typo
Related topics:
upper west sidenew york citymanhattantree fallcentral park
Copyright © 2022 WABC-TV. All Rights Reserved.
TOP STORIES
13 adults, teens treated for carbon monoxide exposure in Great Neck
Focus on gubernatorial races in today's NY primary election
NYC opens public pools, cuts swim programs due to lifeguard shortage
Jan. 6 panel to hold surprise hearing, present new evidence
At least 46 bodies found in 18-wheeler in San Antonio
2 states battle abortion trigger laws; pharmacies limit Plan B sales
Serial burglar targets NYC businesses after hours
Show More
AccuWeather: Picture perfect
3 dead, at least 50 injured after Amtrak train derails in Missouri
Video: Giuliani slapped on back inside supermarket, worker arrested
Where to watch 2022 Fourth of July fireworks
"Nobody saw..." New questions after a girl drowns in a rented pool
More TOP STORIES News