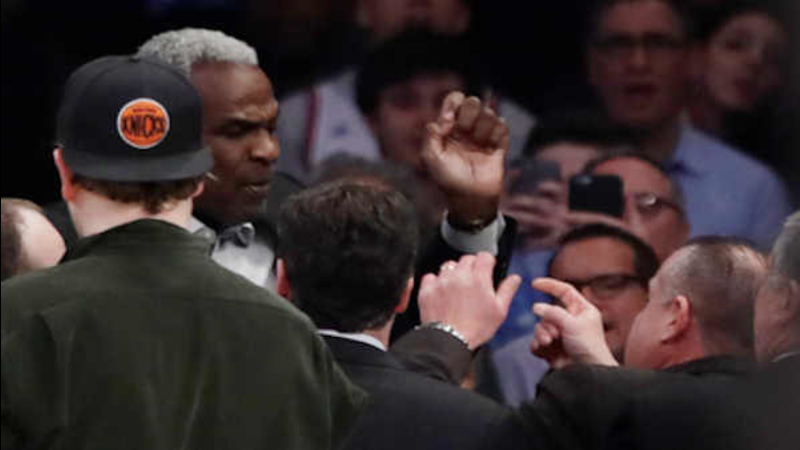 MIDTOWN, Manhattan (WABC) -- New York Knicks legend Charles Oakley has filed a civil suit against James Dolan and the team in response to a February run-in with security at Madison Square Garden and the incident's aftermath, saying he was defamed by claims he committed assault and was an alcoholic after his arrest.

Oakley hinted at the possibility of taking civil action against Dolan when he accepted a deal to have charges stemming from the incident dismissed.

"While the facts of the complaint speak for themselves, Mr. Oakley filed this lawsuit out of principle and his desire to hold Mr. Dolan accountable for his actions," said Douglas Wigdor, a partner at Wigdor Law, the firm representing Oakley in the case. "I can assure you that our firm is committed to doing on his behalf."

Oakley's personal attorney, Alex Spiro, said last month that Oakley would pursue "all civil remedies" based on the incident. Spiro has stated in the past that for Oakley, the issues stemming from the incident at Madison Square Garden and its fallout have always been a matter of principle.

Cameras on the night of the incident showed Oakley hitting Madison Square Garden security members as they attempted to remove him from his seat. Oakley was physically removed from his seat by the arena's security staff.

Shortly after the incident, Dolan suggested that Oakley had an alcohol problem and anger management issues. Dolan was criticized by many current and former players for making those claims. Oakley has denied that he has a drinking problem and denied any wrongdoing at Madison Square Garden. He has said that he felt targeted by security.

The lawsuit says that long before the game, Dolan had "constantly disrespected" Oakley, refusing to make eye contact or shake his hand during meetings, denying him fan appreciation nights and making him pay for his own tickets to games.

The lawsuit blames Dolan for Oakley's removal from the game, saying Oakley "was treated like a common criminal" after Dolan directed security to "forcibly remove Mr. Oakley from the Garden and publicly embarrass him on live television."

Oakley asserts through the lawsuit that it was apparent Dolan had directed his ouster when a security guard loudly asked: "Why are you sitting so close to Mr. Dolan?"

Oakley told the guard he had done nothing wrong and was returning to his seat when two guards grabbed him and pushed him to the ground, demanding he leave the stadium, the lawsuit says.

"As if their public mistreatment of Mr. Oakley was not embarrassing and shameful enough, over the ensuing days defendants Dolan and (Madison Square Garden) launched a coordinated and defamatory public relations campaign against Mr. Oakley, baselessly accusing him of abusing fans and staff, acting inappropriately and struggling with alcoholism," according to the lawsuit.

Oakley has suffered irreparably harm to his name and career and has been discriminated against "based on the false perception that he is an alcoholic, all in a transparent attempt to denigrate his standing among Knicks fans," the lawsuit says.

"However, as he did throughout his playing career, Mr. Oakley has refused to walk to the bench in shame," it adds, saying he was suing to set the record straight and hold the defendants responsible for "reprehensible conduct."

The lawsuit surmises that Dolan's treatment of Oakley might have stemmed from "resentment for Mr. Oakley's passionate following among Knicks' fans, anger that Mr. Oakley would not 'kiss the ring' of the heir to the Madison Square Garden empire or petty insecurities driven by his own personal demons."

Oakley, who played for the Knicks from 1988 to 1998 and helped them reach the NBA Finals, had a poor relationship with the team and Dolan before February thanks in part to his criticisms of the organization and its owner.

The Madison Square Garden Company issued a statement saying, "This is a frivolous lawsuit and nothing more than another attempt by Mr. Oakley to garner attention. We will deal with this accordingly."

Oakley last month accepted a deal -- an adjournment in contemplation of dismissal -- that will lead to the criminal charges being dropped if he stays out of trouble for six months and complies with a condition that prohibits Oakley from trespassing at Madison Square Garden for one year.