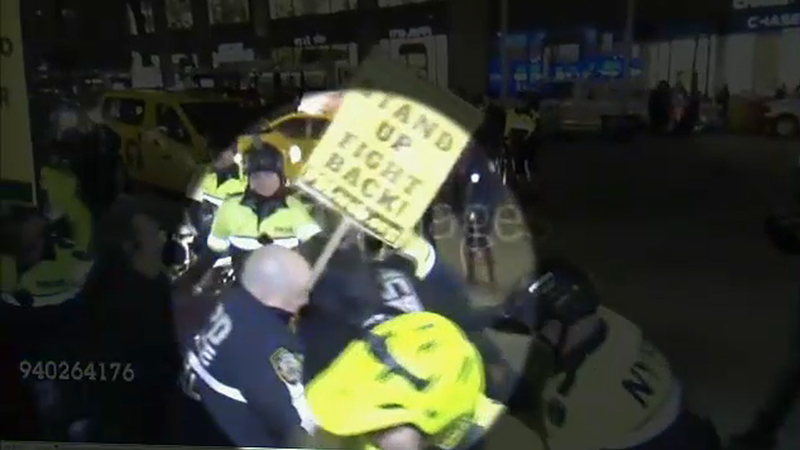 NEW YORK CITY (WABC) -- A prominent civil rights leader is demanding justice after he says police went to far in what ended up being a violent arrest, and he believes video of the incident supports his claim.

Now, Walter 'Hawk' Newsome is suing New York City and the NYPD, and he wants those involved held accountable.

The claims of police brutality stem from a Black Lives Matter protest back in March on the Upper West Side.

Video shows one officer using his bicycle to subdue Newsome, while another is seen punching him twice. It is unclear exactly what led up to the violent confrontation, but Newsome insists the protest was peaceful.

"I was hit several times with a metal mountain bike, pushed into my chest, pushed into my neck, and hit in my groin with it," Newsome said while announcing his lawsuit Friday. "I was punched in my head several times. I was slammed to the ground. A bike was thrown on top of me. From what I saw later in video, there was an officer who had his knee on the back of my skull."

Other officers quickly formed a perimeter, obstructing the view of whatever transpired next.

"I thought they were going to kill him, they way that they were handling him," said Nupol Kiazolu, with Black Lives Matter. "They were beating him, treating him like an animal, and I was just freaking out."

Newsome said he suffered shoulder and back injuries during the arrest. He was charged with disorderly conduct and obstructing governmental administration.