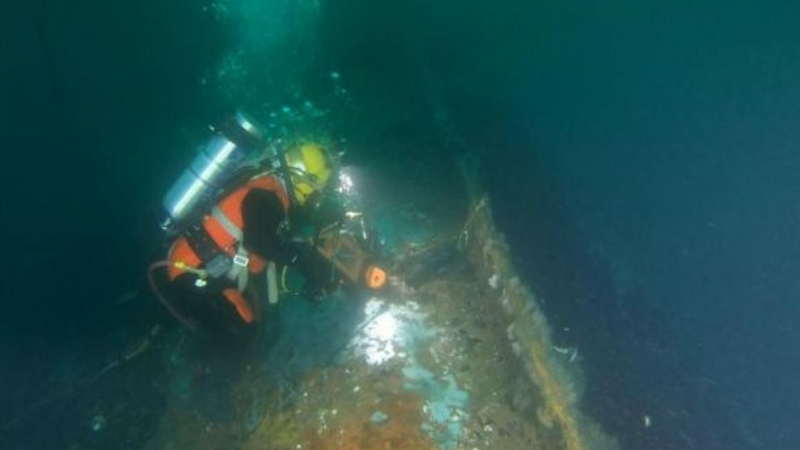 SHINNECOCK, Long Island (WABC) -- The U.S. Coast Guard on Long Island is working with the New York State Department of Environmental Conservation and other agencies to figure out how to stop a World War II oil tanker, which was torpedoed off the coast of Long Island 77 years ago, from leaking oil into the water.

The Coimbra was an oil supply ship owned by Great Britain during World War II. A German U-boat shot two torpedoes into it in January 1942, causing the ship to sink 180 feet down to the ocean floor about 30 miles east of Shinnecock. Thirty-six crew members lost their lives.

In 2015, the Coast Guard began receiving satellite reports of an oil sheen around the wreck site.

Reed said it appears the oil is coming from a pinhole leak. The sheens have appeared about seven to eight times a year.

"These are sporadic. It's not an ongoing or a continuous leak," said Matt Franklin, Director of Emergency Management for New York State DEC.

Franklin said the sheens typically disperse quickly and are not a threat to the environment.

Either way, crews are planning to remove the oil from the ship. First, they have to figure out the location of the tanks on the ship and how much oil they contain. They're using ROVs and divers.

"We have ports that we've drilled into the tanks themselves for which we install our instrumentation. Think of it as a crude oil dip stick. The stick goes down, it measures the total column of oil within that tank," said Aaron Josef with Resolve Marine Group, a company which has been hired to help with the cleanup.

Joseph said he believes the amount of oil on the ship is substantial.

"It's certainly, in my opinion, a bit more than we thought we'd find," he said.

Crews began assessing the wreckage site April 29 and will remain on site 24/7 until at least the end of May.