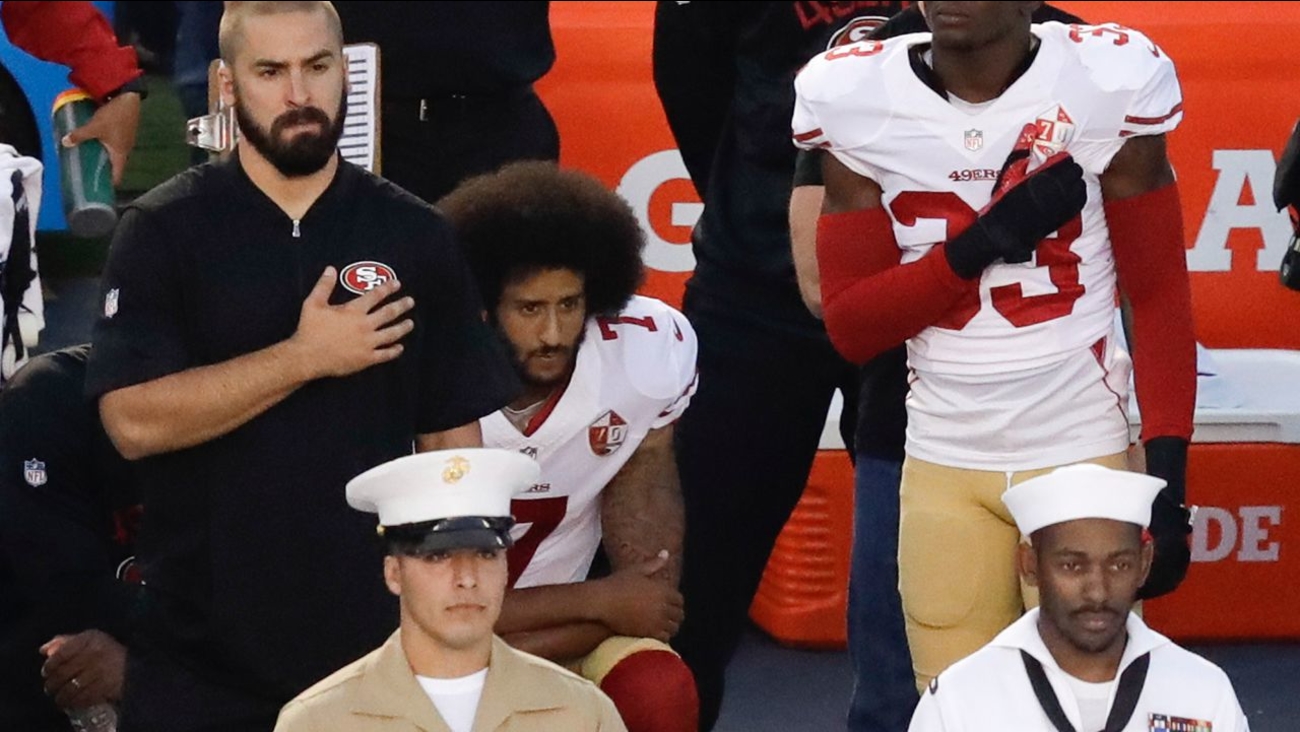 Colin Kaepernick , quarterback of the San Francisco 49ers , kneels during performance of the National Anthem before a preseason game against the San Diego Chargers on Sept 1, 2016. (AP Photo/Chris Carlson)

NEW YORK (WABC) -- A lightning rod for controversy, the first player to take a knee in support of the Black Lives Matter movement, Colin Kaepernick is the nation's most famous unemployed football player.

Monday night, he's filed a grievance against the NFL claiming collusion, not with Russia, but among the 32 NFL owners, to keep him out of the game.

The former 49ers quarterback played six seasons with the team and even took them to the super bowl. But at least 35 others have been signed since he last played.

So Monday morning, his lawyers alleged certain teams wanted to sign him, only to "mysteriously go silent with no explanation."

President Trump set fire to the debate last month, and has only doubled down since then. On Monday, he was railing against the NFL in the rose garden.

"The people of our country are very angry at the NFL, all you have to do is look at their ratings and look at their stadiums," President Trump said. "You see empty seats where you never saw them before."
Report a correction or typo
Related topics:
sportsnew york citycolin kaepernicknfl
Copyright © 2022 WABC-TV. All Rights Reserved.
TOP STORIES
Onlookers urged police to charge into TX school: 'Go in there!'
Vigil held for 19 children, 2 teachers killed in TX school shooting
3 homicides in 3 hours in Brooklyn, police search for gunmen
Car fatally hits 1-year-old girl, injures mother on Staten Island
Adams to meet with NYC business leaders in wake of subway shooting
NYPD officers reunited with blind man they rescued from subway tracks
AccuWeather: Clouds return, PM shower possible
Show More
Uvalde school shooting: What we know about 19 kids, 2 teachers killed
After shootings, Hochul looks at raising age for guns in NY
Former Capital Cities/ABC Chairman and CEO Tom Murphy dies at 96
Alleged shooter in unprovoked subway murder ordered held without bail
NYC mayor, chancellor call on parents to take role in school safety
More TOP STORIES News