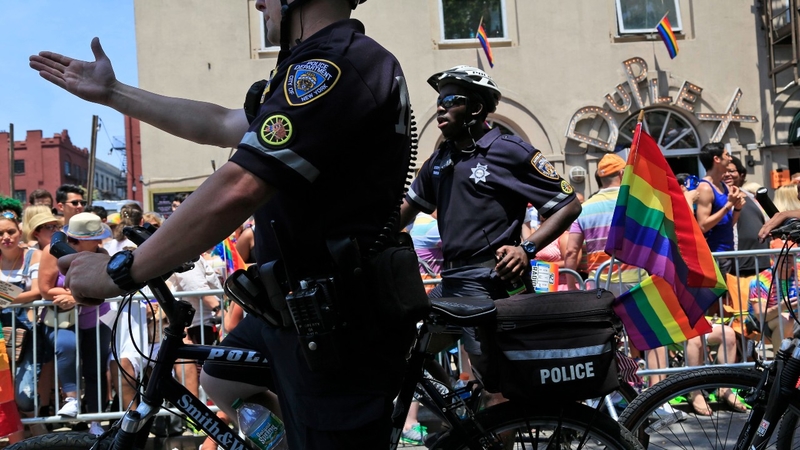 NEW YORK (WABC) -- Mayor Bill de Blasio on Monday reacted to the news that NYC Pride banned the NYPD from taking part in the Pride March until at least 2025, calling the decision a mistake.

De Blasio said he appreciates the 51-year history of pride, which began as an uprising against police, but that safety and solidarity are both concerns.

"First of all, we have to keep people safe, and it's been an incredibly safe, positive event, and we have to be mindful of continuing that," he said. "Second of all, I believe in inclusion. and we are talking about one of the issues is officers who are members of the LGBT community wanting to march, and they express their pride, their solidarity, to the community, and their desire to keep changing NYPD and changing the city. That's something I think should be embraced."

The co-chair of NYC Pride, André Thomas, says the group took into account the comfort of its community.

"This announcement follows many months of conversation and discussion with key stakeholders in the community," Thomas said. "Just last year on Pride Sunday, the NYPD agitated, pepper sprayed LGBT protesters in front of Stonewall."

Thomas said the clashes with police right in front of the Stonewall Inn were uncomfortably too familiar with how the gay rights movement started more than 50 years ago in the same location.

Organizers say they will be working with a private security firm and will be asking the NYPD to stay a block away from all events including the March which draws a large crowd.

NYC Pride organizers say the NYPD will provide first response and security only when absolutely necessary as mandated by city officials.

"In these instances, NYC Pride will review foreseeable NYPD involvement and, in partnership with surrounding venue precincts, take steps to keep police officers at least one city block away from event perimeter areas where possible," the statement read.

The NYPD released a statement on the NYC Pride's decision.

"Our annual work to ensure a safe, enjoyable Pride season has been increasingly embraced by its participants," the NYPD said. "The idea of officers being excluded is disheartening and runs counter to our shared values of inclusion and tolerance. That said, we'll still be there to ensure traffic safety and good order during this huge, complex event."

The NYPD Gay Officers Action League also said they were "disheartened" by the decision "in order to placate some of the activists in our community is shameful."

"I think the most offensive and shameful part for me is to be discriminated against by our own community," said Sgt. Ana Arboleda with the Gay Officers Action League.

But Pride says this is bigger than the march.

"We want GOAL to really step up," Thomas said. "GOAL as an organization, they are the insiders at the NYPD, we're not the insiders. They're the ones who can spur the NYPD to make change."

NYC Pride organizers say that they are looking "to create safer spaces for the LGBTQIA+ and BIPOC communities at a time when violence against marginalized groups, specifically BIPOC and trans communities, has continued to escalate."

"The sense of safety that law enforcement is meant to provide can instead be threatening, and at times dangerous, to those in our community who are most often targeted with excessive force and/or without reason," NYC Pride organizers said.

Vancouver and Toronto Pride have banned police. Sacramento and St. Louis tried to do the same, but reversed the decision after backlash.

The soccer field at Our Savior New American School has been vandalized several times since December, with damages now totaling more than $38,000.