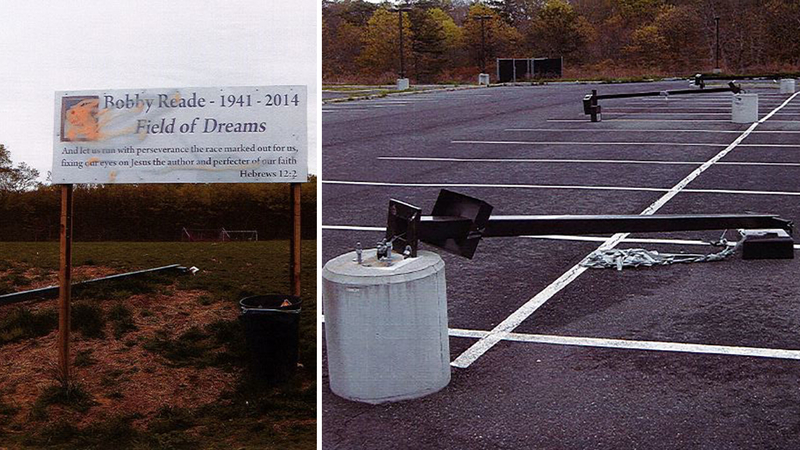 CENTEREACH, Long Island (WABC) -- A soccer field at a Long Island school has been vandalized several times since December, with damages now totaling more than $38,000.

Suffolk County police are now offering a cash reward for information that leads to an arrest.

Authorities say an unknown person or group knocked over multiple light poles at the Our Savior New American School soccer facility, located on Hawkins Road in Centereach, during the overnight hours between December 16 and December 17, 2020.


Since then, police have been called to the location on at least two separate occasions, including May 3 and May 9, for damage to light fixtures, signage, and the sprinkler system.

"We're not going to just give up on how far God has brought us," said Rev. Ronald Stelzer, of Our Savior Church.

He says they're trying to put in cameras and are grateful that the police are getting involved.

"We don't have any knowledge of people who necessarily hate us or are out to get us," he said. "I don't know who did it, why they did it. I don't want to read minds of people I don't know."

"Whoever is doing this is just an evil. It's an evil," said John Reade, Head Elder of Our Savior Lutheran Church.

Reade said one time the vandals used a large tool to dig holes throughout the soccer field, perhaps intending for kids to hurt themselves while playing soccer. Reade said they immediately had to close up the holes.

Reade said they have to pay to have the field irrigation system replaced, which was destroyed on Sunday.

"So that the grass doesn't burn now that the summer is coming," he said.

In total, the vandals knocked over 20 parking lot lights, which cost $2,500 each to replace. They spray painted graffiti on a shed, walls and sign. Some of the graffiti was so graphic, it had to be painted over immediately. They also stole a lawnmower.

"They've broken water mains and turned on the water to flood the fields," Stelzer said.

Anyone with information about these incidents can contact Suffolk County Crime Stoppers to submit an anonymous tip by calling 1-800-220-TIPS.