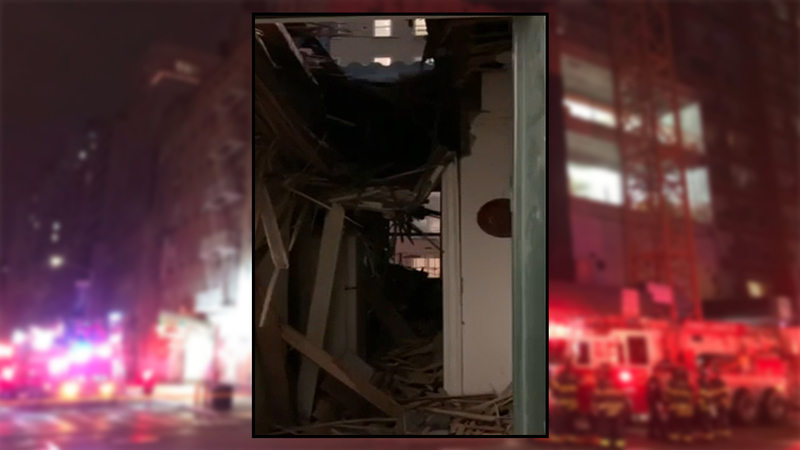 UPPER EAST SIDE, Manhattan (WABC) -- Residents were evacuated from an apartment building on Manhattan's Upper East Side Wednesday night after a concrete slab came crashing down from a construction site.

The FDNY says there was a partial collapse of a concrete wall on the 26th floor of the site, where a 30-story condo is under construction at 1059 Third Avenue.

That sent debris onto the roof and into an apartment of a six-story building on East 63rd Street and Third Avenue.

A man suffered minor injuries when the 6-inch thick concrete slab came crashing down on top of him while he was taking a shower just before 9 p.m.

Exclusive cell phone video showed a hole in the ceiling of the unit on the fifth floor of the building.

The resident, 34-year-old Steven Jones, was inside his studio apartment when he heard what he thought was an explosion.

He walked out of his bathroom into thick, black dust and saw a huge hole in his ceiling.

Speaking exclusively with Eyewitness News, Jones said he is convinced that had he been standing in his kitchen, he would have been killed.

The damage was contained to one floor, and the Department of Buildings says that apartment building is structurally sound.

Other tenants who were also home described the incident.

"We heard a very loud crash, like a bang, almost like something was hitting the building," resident Blake Crist said. "And then we heard people yelling in the hallway."

As for the construction site, the section where concrete fell from has been boarded up.

Officials inspected the site Thursday and issued a full stop work order. They said that once an investigation is complete, further enforcement actions will be taken.

According to DOB records, a similar incident happened at the same site last month when debris fell from 1059 Third Avenue and landed on a neighboring building.

A partial stop work order was issued between floors 26-30 but was fully lifted two weeks later when an inspection found the violating conditions had been corrected.