SAN FRANCISCO -- A Phase 3 trial for the AstraZeneca vaccine will begin in the San Francisco Bay Area this month. It's one of six companies that are part of the U.S. government's Operation Warp Speed to develop a vaccine.

San Francisco's Department of Public Health is encouraging people to volunteer for the AstraZeneca trial, so in order to get an idea of what participants might be able to expect, KGO-TV News reporter Kate Larsen spoke to the first people ever injected with a trial vaccine in the U.S.

Jennifer, Neal, Ian and Judy, are all enrolled in trials for the COVID-19 vaccine developed by Massachusetts-based biotech company Moderna and the federal government.

On March 16, Seattle resident Jennifer Haller was the first person in the U.S. to get injected with the experimental vaccine.

"Looking back at the time with hindsight now, I realize how important it really was," said Haller.

Neal Browning was second in line for the Phase 1 trial, which took place in the Seattle area.

"Initially there was some trepidation," he said. "I knew that this hadn't been tested on animals before. We were both the first human and first animal trials. Each day progressing to that one week point after the first injection, I felt more and more safe with what was going on."

Besides minor shoulder pain at the injection site, Browning and Haller say they never had any side effects.

"I feel fantastic, no side effects for me," said Haller.

The race to develop vaccine for the coronavirus is not only shifting into high gear. It turns out, drug companies are following different maps to find the finish line.

"After the first injection all I had was a little bit of arm pain in my shoulder where I got the shot, but for the second injection a month later, I did have some more issues.
For about 24 hours, I had a fever, and a headache, some nausea, things like that," explained Haydon.

Haydon, a healthy 29-year-old, also fainted at home after a trip to urgent care. "I had some bloodwork done, they actually gave me a COVID-19 test because at the time it wasn't clear what was happening to me."

Haydon tested negative for COVID. "A couple days later it became clear that I had too much of an immune reaction to that high dose of the vaccine."

Haydon says because of the side effects he and a few other high dose participants experienced, Moderna is no longer testing that 250 microgram dose. The company chose to move forward with Phase 3 trials using the middle 100 microgram dose,since the vaccine produced a "rapid and strong immune response" in all 45 people tested during phase 1, regardless of the dose they received.

"I've been following trial since Ian was one of first 45 people," said Sacramento resident, Judy Stokes.

Stokes is Haydon's mom. Inspired by her son, she signed up for Moderna's Phase 3 trial when it was announced in Sacramento.

"I really wasn't sure if they would want me," she said. "I'm 68-years-old and I have heart disease and I have high blood pressure, but it turns out that is exactly who they wanted. They wanted a diverse group of people and those more vulnerable to the virus."

She got her first injection last week and does not know if she received the vaccine or a placebo. "They are monitoring us and will be for two years, that's almost like an extra bonus."

Besides sore shoulders on injection day, all four participants share a similar outlook on the vaccine trials.

"We all want a coronavirus vaccine, but we're not going to get one unless people volunteer to take part," said Haydon.

Stokes says whether it's the Moderna vaccine or another, she feels one of the trials will prove successful. "I feel hopeful, this one or another one, I feel hopeful."
Report a correction or typo
Related topics:
health & fitnessvaccinesmoves in medicinecoronavirushealth careu.s. & worldclinical trialscovid 19
Copyright © 2021 KGO-TV. All Rights Reserved.
CORONAVIRUS 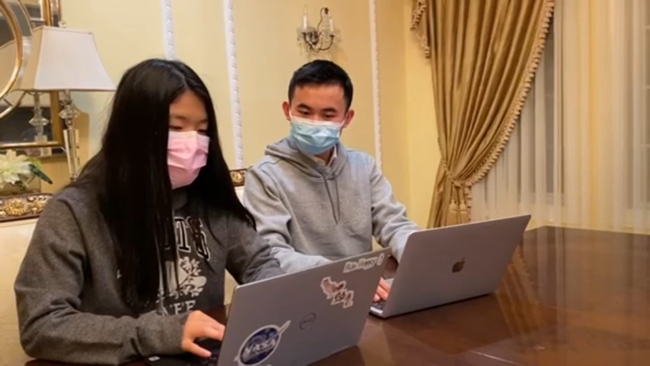