Cubans in New Jersey protest in support of reform back home 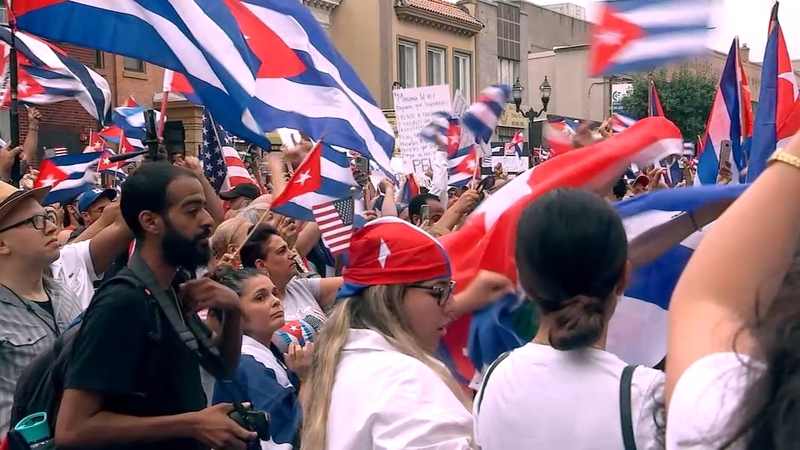 Cubans in NJ protest in support of reform back home

UNION CITY, New Jersey (WABC) -- Protesters in Cuba are getting support from their brethren living in the United States, including places in New Jersey and Miami.

The Republican gubernatorial candidate in New Jersey joined the protest.

Historians say Cuba hasn't seen protests like what they are experiencing in decades and local Cuban Americans are frustrated.

While some argue the GOP is trying to thwart voting rights in this country, he says he supports the right to vote for all, especially those in Cuba.

"First thing I'd like to see is for us to provide some medicine and food, people are crying out for the most basic human rights. America always runs to the rescue, it's time to do that particularly for a country whose border is 90 miles from our shores," New Jersey GOP gubernatorial candidate Jack Ciattarelli said.

The protest in Hudson County, New Jersey was just as spirited as a similar protest by Cuban Americans in South Florida, where they shut down a major highway.

The calls for change are growing in this country and putting pressure on the Biden administration to take decisive action.

"This shows the united force that we have with our Cuban brothers and sisters that are suffering every day on the island," Woodcliff Lake Mayor Carlos Rendo said.

The repression in Cuba is escalating on the island nation. Meanwhile, the protesters here vow to keep up the momentum in the efforts to see a free and democratic Cuba.