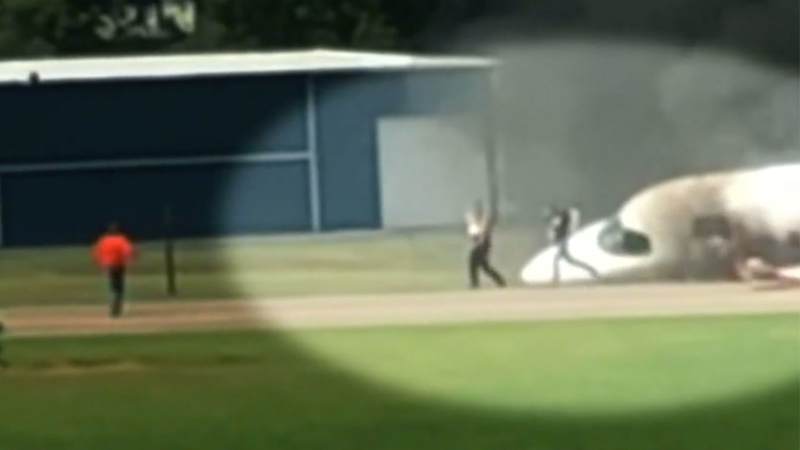 ELIZABETHTON, Tenn. -- Dramatic new video shows the heart-stopping moment that those aboard a plane carrying Dale Earnhardt Jr. and his family escaped from the burning wreckage after the aircraft skidded off the runway in Tennessee earlier this week.

The footage, obtained by ABC affiliate WSOC, shows the Cessna Citation's front door popping open as flames and smoke billow from the back of the plane. A man steps out of the plane and then reaches back to pull the NASCAR legend's baby girl through the door. A second man then jumps from the plane, followed by Earnhardt's wife Amy, who briefly trips before running to safety.

The family's dog is also seen running away from the flaming wreckage.

Eyewitnesses watched the family escape just before the plane, which was carrying a thousand gallons of fuel, erupted into a fiery inferno.

Authorities said the plane that crashed carrying Dale Earnhardt Jr. and his family produced a large fireball because it was carrying more than a thousand gallons of fuel.

Investigators said Friday that the plane bounced multiple times during a crash landing and veered off the runway before ending up on a Tennessee highway.

"It's just the grace of the good Lord that a vehicle didn't get struck by the plane," Elizabethton Police Chief Jason Shaw said at a news conference. "It's a very heavily trafficked roadway."

Earnhardt's sister, Kelley Earnhardt Miller, said in a statement that all five people aboard the plane Thursday are "doing well." Earnhardt, now a NASCAR television analyst, was taken to the hospital for evaluation Thursday and discharged that day.

National Transportation Safety Board investigator Ralph Hicks said the Cessna Citation Latitude had left Statesville, North Carolina, about 20 minutes before the crash at 3:40 p.m. Earnhardt was with his wife Amy, 15-month-old daughter Isla, two pilots and a dog.

Federal Aviation Administration officials had said the plane caught fire after landing. Hicks said everyone aboard was able to evacuate through aircraft doors.