End of an era: Commissioner Dan Nigro retires after half century with FDNY 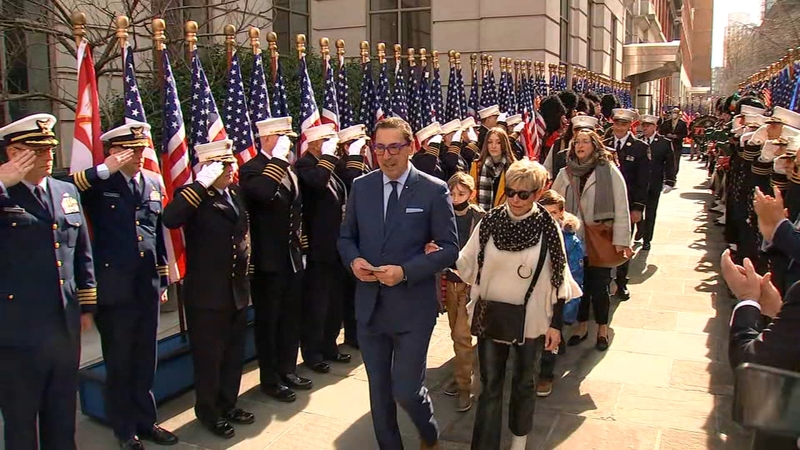 End of an era: Nigro retires after half century with FDNY

Nigro is one of six people to ever hold every single rank in the FDNY, and the fourth longest-serving commissioner is stepping aside after 53 years in the department.

On Tuesday, he was presented with a proclamation by New York City Mayor Eric Adams, who said he wanted to appoint someone new for the job.

Nigro retired from the department once before, in 2002 when he was Chief of Department, but he returned when he was named commissioner in 2014.

"I'm very proud that we've more than doubled the number of people of color and women in this department, and we are moving forward in that direction," Nigro said. "We're not where we need to be yet, but I think in the future we will be, and this department will reflect the great city we live in."

Eyewitness News believes she is also on the shortlist of candidates to take the job permanently and would be the first woman to hold the job.

It is not yet known when the new FDNY commissioner will be announced.

Nigro led the nation's largest municipal fire department through the worst of the COVID-19 pandemic and recently oversaw its response to the city's deadliest fire in three decades.

With the FDNY's ranks decimated by the deaths of 343 firefighters and fire officials in the Sept. 11, 2001, terrorist attacks, Nigro received a battlefield promotion to chief of department. He led rescue and recovery operations at ground zero and helped the department rebuild.

"Since the day I raised my right hand 53 years ago and followed my father into the greatest fire department in the world, I have been blessed, privileged, and truly honored to serve the people of our great city," Nigro said.

Beginning in 1988, while in the rank of Battalion Chief, he served in several administrative positions at headquarters, including the Chief of Personnel and the Chief of the Bureau of Health Services, where he oversaw the medical care and treatment for FDNY members.

Upon his promotion to deputy chief in 1993, he returned to the field and served in Division 3 in Manhattan. A year later, he was appointed Deputy Assistant Chief and was instrumental in merging the Emergency Medical Service of the New York City Health + Hospitals Corporation into the FDNY. Following the merger, he became the chief in charge of EMS.

In 1997, he was promoted to Chief of Operations, overseeing all operations and training for more than 14,000 uniformed fire and EMS personnel.

After the September 11, 2001, attacks on the World Trade Center, he was appointed Chief of Department, following the death of his close friend, Chief Peter J. Ganci, Jr.

His father, also named Daniel, worked for the fire department for 33 years.

As commissioner, Nigro continued a 16-year streak of fewer than 100 fire deaths in the city per year, expanding fire safety education efforts, installing alarms, and turning tragedies, like the recent Bronx blaze that killed 17, including eight children, into teachable moments so they don't happen again.

Kristin Thorne has more on the offshore wind project from Wainscott.

Nigro also sought to diversify the department and end pervasive racism in its ranks.

Last October, he suspended nine firefighters without pay in connection with a string of racist messages and memes they shared on their phones, including ones that mocked the Minneapolis police killing of George Floyd.

The fire department called the suspensions the most severe punishments ever handed down in the history of the Fire Department of the City of New York, but some Black firefighters said they didn't go far enough.

At the same time, the department said it has welcomed historically diverse classes into its academy and now has more women and firefighters of color than ever before.

Nigro's biggest challenge as commissioner was leading the fire department through the chaotic, early days of the pandemic - the busiest stretch in the history of the city's EMS operation. For a time, FDNY ambulances were responding to about 6,000 calls a day - more than 50% more than average and far exceeding the demand on 9/11.