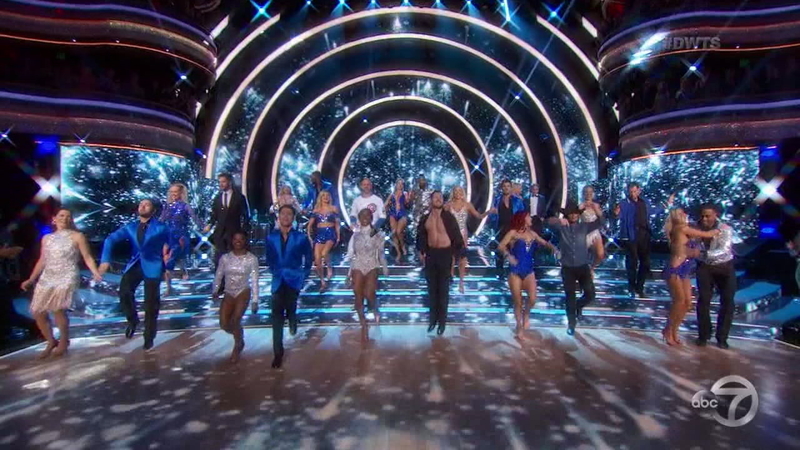 LOS ANGELES -- Yes dance fans, you've been hanging in there for 24 seasons and 400 episodes!

And on this latest round of "Dancing with the Stars" it looks like we'll see a few celebrities who have prior dance experience, plenty of stars loaded with charisma, along with several heartfelt stories sprinkled in along the way. The best part of round one: no one will be eliminated!

Let's get ready to rumba!

Here's a rundown of scores from the first round, from highest to lowest:

Simone Biles: 32 out of 40
The all-star Olympic gymnast watched her teammate Laurie Hernandez dance to mirror-ball glory last season and thought "if she can do it, maybe I can too!" That is an understatement. Pro dancer Sasha Farber has been handed a gem on a silver platter. Yes, expectations will be high for this couple. But if they can pull straight 8's from the judges during week one, and for a tango, who knows what will happen by week 13? Head judge Len Goodman praised the balance she brought between performance and content; and Carrie Ann Inaba thought it was an exquisite exhibition of technique, elegance and power.

Rashad Jennings: 31 out of 40
The football star may have to perform some fancy footwork on the field as an NFL running back but that doesn't always translate to the ballroom. In this case, it definitely does. Rashad and pro dancer Emma Slater know they have something magical. Julianne Hough called their cha cha the dance of the night; and Bruno Tonioli thinks Rashad is a revelation, sparkling with star quality. Do you think the show is setting us up for a finale featuring engaged couple Sasha and Emma going head to head?

Nancy Kerrigan: 28 out of 40
The two-time Olympian has been out of the competitive world for a couple of decades and has been focusing on being a mom. But DWTS has always been a favorite of Nancy's and she finally said yes to the show. She met her pro partner Artem Chigvintsev at the ice rink (and for some reason he was shirtless). He's excited because he's never been paired with an athlete before. But Nancy learned in rehearsal it's a lot easier to participate from your couch than in the rehearsal hall! She had nothing to worry about and the judges were enchanted. Len praised the flow and movement of her Viennese waltz and called the two a pairing with great promise.

Photo gallery: Week 1 of "Dancing with the Stars"


Heather Morris: 28 out of 40
The former co-star of "Glee" is a lifelong dancer and has the albatross on her neck that she might already be too good. Morris hasn't danced in a few years, and has spent her time being a wife and a mom of two. She's got a great teacher though in Maksim Chmerkovskiy (who of course is also a new dad!) Ballroom is a whole new animal for Heather; she's never "partner" danced until now. All of that doesn't look like it means much because they were terrific. Bruno called them "Beauty and the Beast" (in a good way of course); Len agreed and called it a match made in heaven.

David Ross: 28 out of 40
So how do you follow up a World Series win? You retire from Major League Baseball and go on DWTS! Ross has the energy, exuberance and outlook that make you think he could do just about anything. His baseball nickname is "Grandpa" and that proves to be funny with his very young partner Lindsay Arnold. But never mind the age difference - this pair is in it to win it. Both Julianne and Carrie Ann said David was "Gramps" no more!

Normani Kordei: 27 out of 40
This young member of the girl group "Fifth Harmony" wants people to see she's more than a singer. She also has another reason for joining the show: her grandma. It's her favorite show; so much so that Granny has kept a log book of scores and comments from the past seasons! Can't wait to meet her in a future episode! Normani is paired with last season's champ Val Chmerkovskiy and even though they had to do the very tough quickstep, she did it with style and flair - especially for the first week! Since they danced first, Julianne thought Normani set the tone for the night and for the season.

Mr. T is one of the celebrities appearing on the 24th season of "Dancing with the Stars."

Erika Jayne: 24 out of 40
She's a "Real Housewife" and a singer whose songs top the club charts. Erika may be new to the DWTS demographic but she's got a huge fan base and an even bigger amount of confidence. Her mission is to show women that it doesn't matter your age (she's 45) you can still dream big and push limits. Len liked her flair but thought her salsa was a bit raunchy; Julianne and Carrie Ann did not agree and love the message she brings to women.

Nick Viall: 24 out of 40
Most recent "Bachelor" Nick Viall will probably be spending more time with Peta Murgatroyd in the coming weeks than his new fiancée Vanessa. Come to find out in the dance rehearsals: this guy is kinda funny! Maybe they edited his quips out of "The Bachelor"? He and Peta have an easy rapport and they do a lovely (first week) cha cha. Carrie Ann sees lots of potential but Nick needs to calm down, relax and enjoy!

Bonner Bolton: 22 out of 40
If you're not up on your PBR (Professional Bull Riders) tour stars, you might not be familiar with Bonner. But he's a star in the rodeo world and this experience is bound to get him an arena full of new fans. He earned a big "aww" moment when we learned he broke his neck in a bull-riding accident just over a year ago and was told he might never walk again. Now he doesn't just walk, he dances! Sharna Burgess seems a little smitten with Bolton when she first meets him. On a ranch. With horses and wranglers. All of the judges thought these two had chemistry for days with Julianne and Len both saying they see plenty of potential.

Charo: 21 out of 40
There was more Coo-Chi Coo-Chi than we have ever seen on the dance floor when Charo entered the ballroom. Her pro partner Keo Motsepe has his hands full trying to harness the energy this pop icon brings to the table. Her salsa isn't bad (for a first week) but all the judges agree she needs to focus on technique and channel that unbridled energy. And as a viewer, maybe stop screaming so much?

Mr. T: 20 out of 40
Mr. T. calls himself an athlete, an actor, and an advocate for young people. And that last job seems to be his focus these days. He says he took on this dancing challenge to help inspired kids "go for it" no matter what; you only win when you try! He tried, that's for sure, and brought energy to the ballroom but not much actual dance. Len said the "T" in his name was not for technique but for tenacity and trying.

Chris Kattan: 17 out of 40
As a ballroom dancer, actor Chris Kattan is starting out as a great comedian. His first meeting with pro Witney Carson was a little awkward because she had never seen any of his "Saturday Night Live" comedy routines or his movies. Thank goodness for YouTube! She quickly caught up and utilized his iconic "Night at the Roxbury" head-shaking character for their routine. (You know you're shaking your head right now! "What is love... baby don't hurt me!") Bruno thought the character was spot on but the cha cha non-existent. Carrie Ann said he hit her soft spot for people who do "goofy dancing." And yes, it was a compliment.