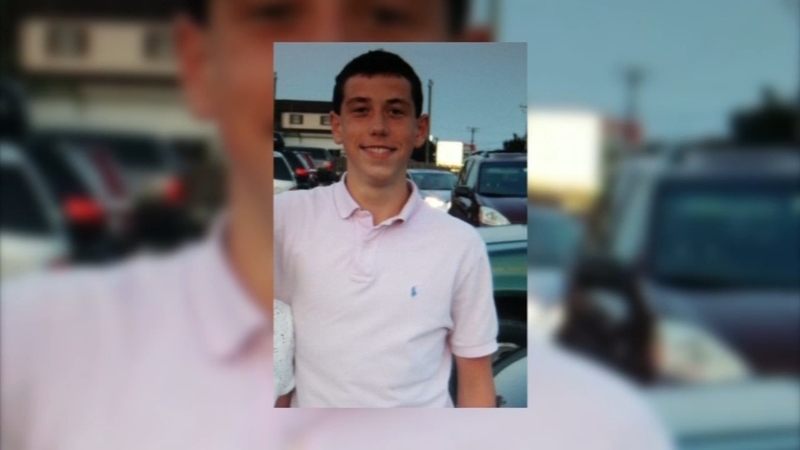 PHILADELPHIA, Pennsylvania -- The search continues for the killer of a Temple University student who was shot multiple times inside his off-campus apartment.

Daniel Duignam's friends and classmates are frightened and grieving after the sixth student death at Temple since September.

"Just to wake up and find out that something like that went on under your nose, it's surreal, very surreal," junior Natalie Lepera said.

Investigators are looking into the puzzling murder of the 21-year-old, a third-year business student. He was found shot to death in his apartment on the 1700 block of Diamond Street just before 10 p.m. Saturday

He had gunshot wounds in his stomach, arm, and cheek, and sources tell sister station WPVI in Philadelphia there were no signs of forced entry or a struggle.

Neighbors were stunned at the tragic news, especially one who saw the victim less than 48 before he was killed.

"He sits on the side," said Nicole, who did not give her last name. "He smokes his cigarettes in the mornings. You may see him in the afternoon. He was cool. It's shocking that a young man lost his life in his own home."

Duignam's former basketball coach at Nazareth Area High School tweeted that he and his staff are in utter disbelief.

"It is with great sadness and utter disbelief having lost a member of the Blue Eagle Basketball family at such a young age," the tweet read. "Our thoughts and prayers go out to the Duignam family."

It is with great sadness and utter disbelief having lost a member of the Blue Eagle Basketball family at such a young age. Our thoughts and prayers go out to the Duignam family.#Degs #Alwayssmiling#blueeagleforever
Coach Arndt & Staff pic.twitter.com/7fYI3cimHj

Duignam is from Northampton County and the grandson of a former Tatamy borough mayor. The current mayor said on Facebook that he is heartbroken.

"I am beyond heartbroken to let you know that one of our own has fallen to a senseless tragedy," Mayor Christopher Morten said. "Dan was the grandson of former Mayor Luke Duignam. I cannot imagine their pain and sadness." 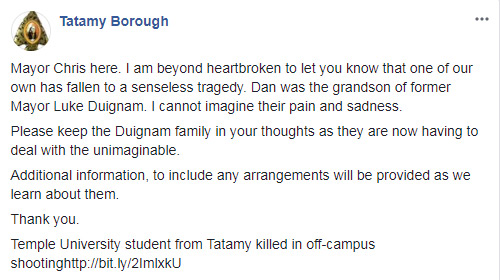 Nicole said she has six children herself and can't imagine what Duignam's mother is going through.

"I just pray for his family," Nicole said.

Authorities don't believe this was a random shooting. However, Temple and Philadelphia police are beefing up patrol on and around campus.