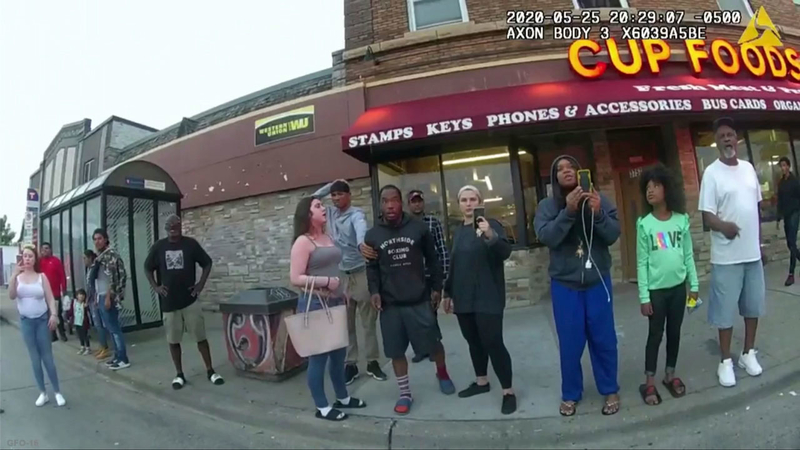 MINNEAPOLIS -- The teen who filmed the murder of George Floyd by former police officer Derek Chauvin said that her uncle was killed Tuesday in a fatal car crash involving Minneapolis police.

In a Facebook post, 18-year-old Darnella Frazier said her uncle Leneal Lamont Frazier died after police collided with his car while they were chasing a carjacked vehicle. Officials from the Minneapolis Office of Police Information said the driver of the stolen car was involved in several robberies and refused to stop for police.

"Minneapolis police killed my uncle," Darnella Frazier said in the post. "Another black man lost his life in the hands of the police ... I couldn't accept what I was hearing and still can't. Some things just take time to process."

The fatal collision took place at the intersection of 41st Avenue North and Lyndale Avenue North in Minneapolis, according to police. A third car was also caught up in the collision.

Minneapolis Office of Police Information officials said that both the driver of the uninvolved car and the officer were taken to the hospital, where the driver died shortly after. The officer was treated for non-life-threatening injuries.

Darnella Frazier, the teenager who filmed the murder of George Floyd, received a special citation Friday as coverage of racial injustice protests in the U.S. and the global coronavirus pandemic dominated this year's Pulitzer Prizes.

In her social media post, Darnella Frazier described her final moments with her uncle, saying Minneapolis police is responsible for the family's "big loss."

"I was just with you at the beach," she wrote. "If I would've known that would be my last time seeing you, I would've hugged you so much longer, told you 'I love you' way harder."

During the Chauvin murder trial, the teen took to the witness stand to recount the pain she said she has experienced since witnessing Floyd's murder.

Chauvin, a former Minneapolis police officer, was convicted of second-degree unintentional murder, third-degree murder and second-degree manslaughter and was sentenced to 22 1/2 years in prison for Floyd's death.

Frazier, who was 17 at the time of the incident, told prosecutors in March that she continues to harbor a lot of guilt and trauma.

"When I look at George Floyd, I look at my dad, I look at my brothers, I look at my cousins, my uncles because they are all Black," she told prosecutors. "And I look at that and I look at how that could have been one of them. I stayed up [at night] apologizing and apologizing to George Floyd for not doing more and not physically interacting, not saving his life."
Report a correction or typo
Related topics:
minnesotacar crashpolice chasegeorge floydu.s. & worldrace in america
Copyright © 2022 ABC News Internet Ventures.
TOP STORIES
Shark patrols after man bitten; Tri-State beaches gear up for July 4
2 officers killed, others injured in Eastern Kentucky shooting: police
2nd visitor in 3 days gored by Yellowstone park bison
Happy Bobby Bonilla Day: Here's why the Mets pay him every July 1
Family member beats shark to free teen girl from its jaws
United flight cuts take effect as July 4 holiday travel kicks off
Nathan's Hot Dog Eating Contest competitors weigh in on Coney Island
Show More
NY lawmakers now considering abortion protections along with gun laws
14 firefighters, 3 residents hurt in 5-alarm NYC fire
AccuWeather: Very hot and humid
NY nurse who got 1st COVID shot in US to be awarded Medal of Freedom
Lyft driver stabbed by a passenger in Connecticut
More TOP STORIES News