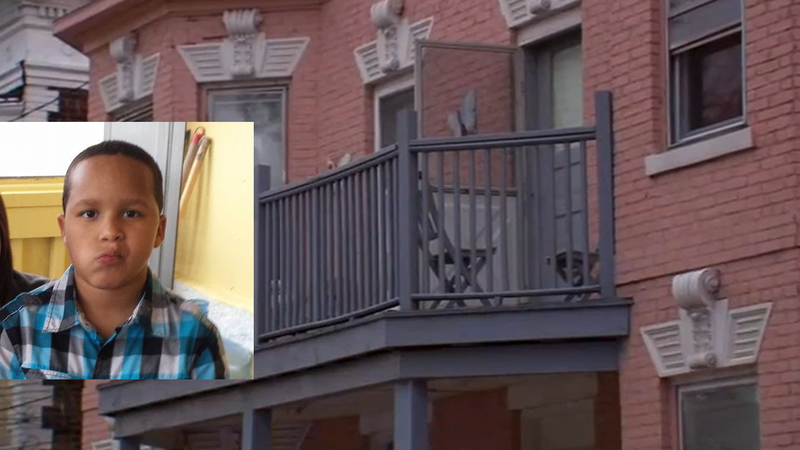 PERTH AMBOY, New Jersey (WABC) -- A New Jersey community is mourning the death of a young boy who died in a fall from a balcony Thursday afternoon.

Authorities say 9-year-old Dariel Sosa and his 13-year-old cousin Jason Huerta were playing on the second floor balcony on Brighton Avenue in Perth Amboy when the railing gave way and they fell to the ground.

Paramedics rushed both boys to the hospital, but doctors could do nothing to save the younger boy, a student at nearby Wilentz Elementary School.

"They were together everywhere," aunt Raquel Fernandez said. "When they were not in the room playing with the Xbox, they were out here on the bike. They were inseparable."

So when one of them went to the balcony Thursday afternoon, the other wasn't far behind.

"They both went up there and started playing," Fernandez said. "They lean against the rail, and that is when it broke and they fell down."

Huerta's grandmother, Socorro Reyes heard the noise and ran outside.

"The ambulance came, and I saw the kids with blood coming through his nose," she said. "The one who died had the bloody nose."

Sosa's family has set up a GoFundMe page in his name, on which they wrote the following message:

"Dariel was only 9 years old. After an unfortunate and very tragic accident our son's life was taken too soon. I cannot find the words to express the anguish and devastation of my family's loss. Everyone who knew Dariel knew he loved to play baseball and loved the Mets. Dariel had a smile and personality that would put the saddest person in a good mood. Please help us raise funds for his farewell during this painful time, as we grieve the sudden passing of our son. We thank you for your prayers and support."

Grief counselors were on hand Friday at his elementary school, while police try to figure out why the railing failed. Investigators believe it was an accident, but family members blame the landlord.

"They just think about getting their monthly payment, they don't care about what is going on in the house," Fernandez said "He hasn't shown up yet, because he know it's his responsibility to keep everyone there safe, which he never has done it."

With so much anger and sadness, there was no consoling the family.

"They're all devastated with what happened," Fernandez said. "They're little kids, you know, 9 years old. We weren't expecting something like that to happen."

There is a small memorial outside the home, underneath the balcony. The family said they are still waiting to hear from the landlord and steering clear of that balcony for now. Huerta remains in stable condition.

"On behalf of the City of Perth Amboy, I want to extend my sincerest condolences to the family, their loved ones and classmates," Perth Amboy Mayor Wilda Diaz said in a statement. "Our Perth Amboy Chaplains were with the families yesterday evening to offer grief counseling. We ask our community to join in prayer and good faith, as they mourn the loss of their 9-year old son."