Candidates face off in third Democratic debate on ABC 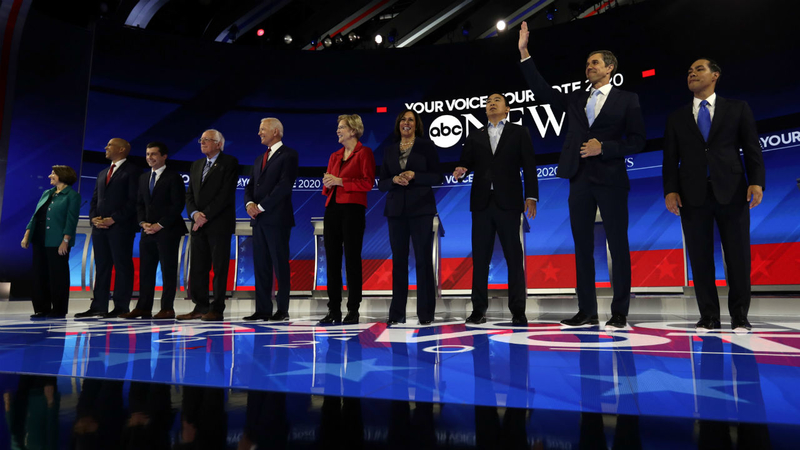 "This is America," said Biden, his party's early front-runner, before calling Sanders "a socialist." ''I stand with Barack Obama all eight years, good bad and indifferent."

The top White House hopefuls faced off for the first time alongside seven other candidates who are under increasing pressure to break out of the pack. All assailed Trump without mercy.

"President Trump, you have spent the last two-and-a-half years full time trying to sow hate and vision among us, and that's why we've gotten nothing done," Harris declared.

Biden slapped back at both Sanders and Warren and contended they haven't yet explained how they would pay for Sanders' government-backed "Medicare for All" health care plan.

One of the biggest moments came exactly one hour in when O'Rourke, who lives in El Paso, was asked if he was really in favor of confiscating guns.

"Hell yes, we're going to take away your AR-15, your AK-47," he said, "We're not going to allow it be to be used against a fellow American anymore."

Early in the debate Biden's closest competitors didn't attack the frontrunner but Julian Castro certainly did.

"Every time something good about Barack Obama comes up he says Oh I was there. I was there, that's me too," said Castro. "And then every time somebody questions part of the administration that we were both part of, he says, well that was the President."

Castro, who served as Obama's housing chief, kept the pressure on the front-runner.

The 44-year-old Texan appeared to touch on concerns about Biden's age when he accused the former vice president of forgetting a detail about his own health care plan. At 76, Biden would be the oldest president ever elected to a first term.

He added: "I'm fulfilling the legacy of Barack Obama and you're not."

The ABC News debate was the first limited to one night after several candidates dropped out and others failed to meet new qualification standards. A handful more candidates qualified for next month's debate, which will again be divided over two nights
Earlier this year, prior to the first Democratic debates, the DNC announced more stringent qualifying rules for the fall debates in September and October.