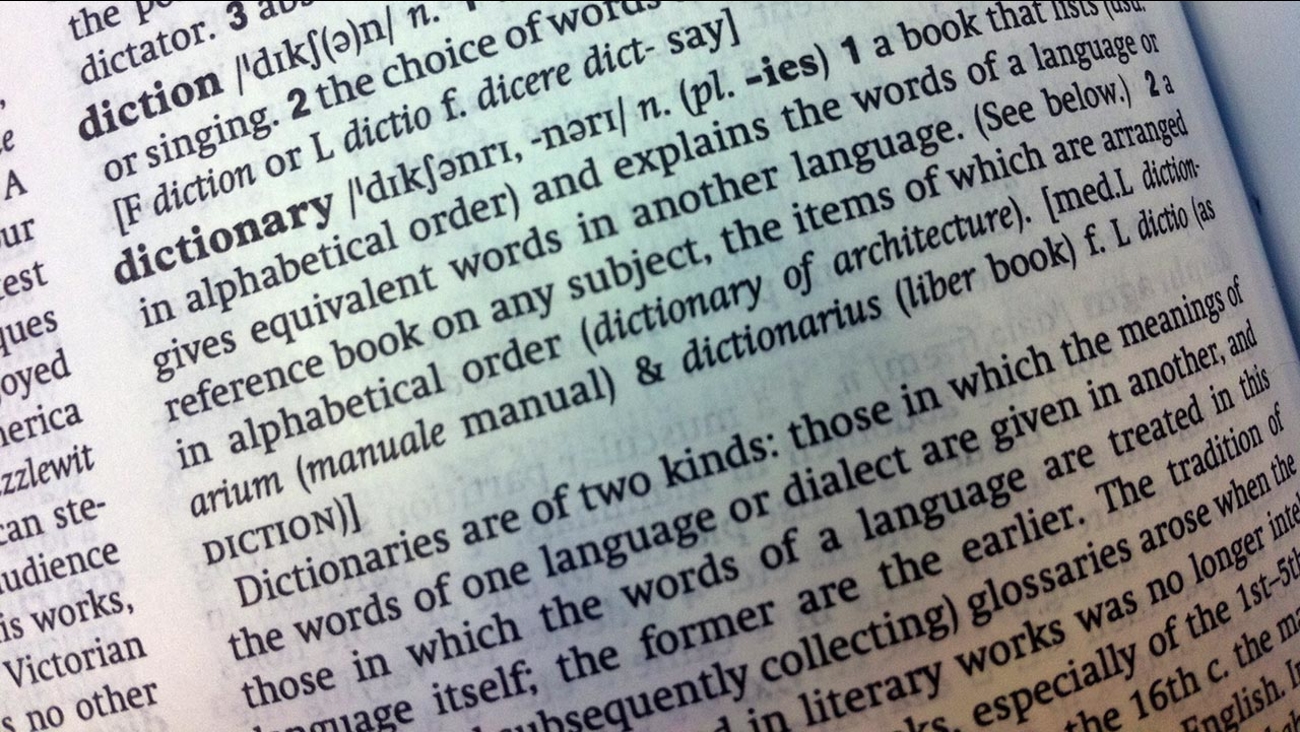 NEW YORK (WABC) -- In the latest update, dictionary.com added more than 1000 words to their dictionary, including gaming and gender-related terms.

The website says they rely on traditional publications, technology, and their viewer suggestions to decide which new words will be defined.

Not all words make the cut, but after extensive research, new words are added to the dictionary multiple times a year.

Here's a list and definitions of new words added to the dictionary:

agender: relating to a person who does not have a specific gender identity or recognizable gender expression.

basic: characterized by predictable or unoriginal style, interests, or behavior.

bigender: relating to a person who has two gender identities or some combination of both.

blackhat: a hacker who violates the security of a system for personal profit or for the gratification of causing damage.

completionist: a player who attempts to complete every challenge and earn every achievement or trophy in a video game.

crash blossom: an ambiguously worded headline whose meaning can be interpreted in the wrong way, as "Missing Woman Remains Found."

dark web: the portion of the Internet that is intentionally hidden from search engines, uses masked IP addresses, and is accessible only with a special web browser.

dox: to publish the private personal information of (another person) without the consent of that individual.

gender-fluid: relating to a person whose gender identity or gender expression is not fixed and shifts over time or depending on the situation.

gesture: a particular movement of the fingers or hand over a screen, used to control or interact with a digital device.

haptics: the study or use of tactile sensations and the sense of touch as a method of interacting with computers and electronic devices.

hyperlocal: focused on a very small geographical community, as a neighborhood.

lifehack: a tip, trick, or efficient method for doing or managing a day-to-day task or activity.

microaggression: a subtle but offensive comment or action directed at a minority or other nondominant group that is often unintentional or unconsciously reinforces a stereotype.

permadeath: (in a game, often a video game) the permanent death of a defeated character, after which the player of the game cannot continue with the same character.

ship: to take an interest in a romantic relationship between fictional characters or famous people.

slacktivism: actions taken to bring about political or social change but requiring only minimal commitment, effort, or risk: students engaging in slacktivism by signing an online petition.

smartwatch: a computing device that resembles a wristwatch and is attached to a band worn around the wrist.