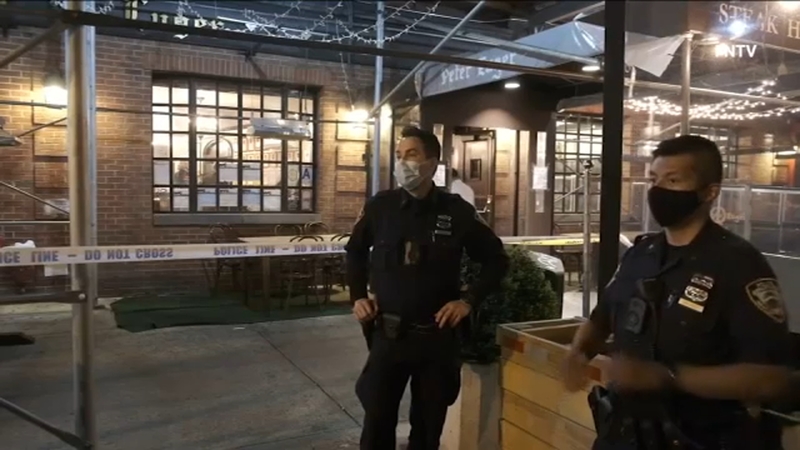 WILLIAMSBURG, Brooklyn (WABC) -- A 24-year-old man is in custody after opening fire outside the Peter Luger Steakhouse in Williamsburg, Brooklyn, randomly striking two people eating outside.

Arkies Sommerville is charged with two counts each of attempted murder, criminal use of a firearm, and criminal possession of a weapon.

Police say he was at a family celebration inside the iconic restaurant when he became agitated and left around 9:45 p.m. Thursday.

He stormed out to the sidewalk, turned around near the outdoor seating area, and fired in the direction of the building.

He struck two diners who had nothing to do with the dispute.

A 24-year-old man is in custody after opening fire outside of Peter Luger's restaurant in Williamsburg, Brooklyn, randomly striking two people eating outside.

They were eating at separate outdoor tables, and did not know the gunman, or each other.

Police say Sommerville tossed his gun and fled on foot, but he was caught about a block away at South 10th Street and Bedford Avenue.


He was brought back to the restaurant and positively identified by other diners.

After he was caught, Sommerville was taken to Bellevue Hospital because he was acting erratically, possibly due to intoxication.

His weapon was recovered outside the restaurant.

NJ Burkett reports on the changes for the curfews on food and beverage service in New York state.