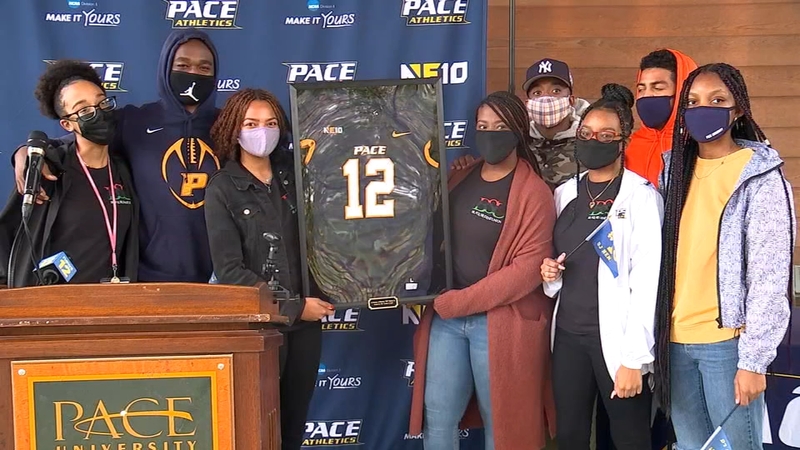 PLEASANTVILLE, New York (WABC) -- A vigil was held for a college student and star athlete who was shot and killed by a cop Westchester County 10 years ago.

"DJ gives us a reason to fight, he reminds us of our purpose here on this campus," Black Student Union President Amari Perez said.

Henry was shot and killed 10 years and 12 days ago by a Pleasantville police officer.

Cleanup continues Wednesday after another night of unrest in Philadelphia

He was moving his car away from a fight that had broken out in front of an off-campus bar.

The officer claimed Henry was speeding away and that he fired through the windshield when he was thrown onto the hood.

A Westchester County grand jury did not indict the officer.

"We want to do our part just to make sure DJ's name is never forgotten and make sure that DJ's story is heard, because it's 10 years later and we're still facing the same thing today," Pace University Quarterback Carlton Aiken said.

Henry was a member of the Pace football team. On Thursday, the university retired his number 12.

Henry's parents sent a videotaped message to the students.

"He loved playing football at Pace and he loved being a part of team, and so we feel like you guys are a part of that team now as we work together to create true change in our world," Henry's mother Angela Henry said.

The justice department declined filing civil rights charges, but there have been renewed calls for the case to be re-examined.

"We're still trying to pursue accountability for our son, and your collective voices can help us," DJ Henry's father said.

The family is urging students to reach out to Westchester's new incoming district attorney and other elected officials in hopes of having the case reopened.