Trump addresses supporters in The Woodlands 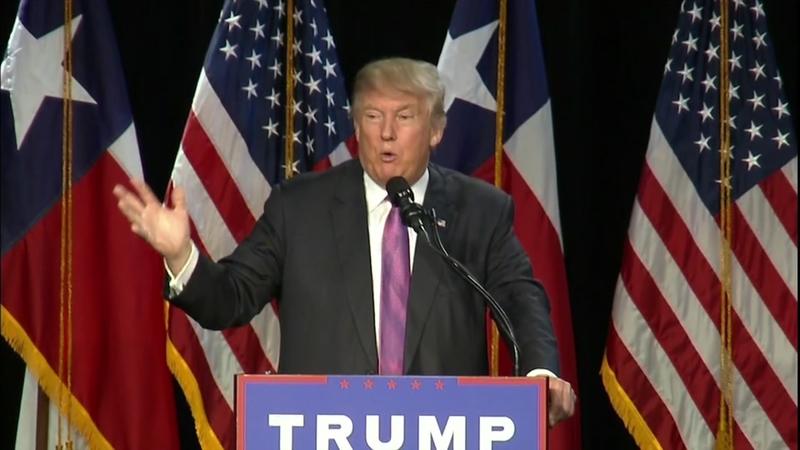 Trump's full address in The Woodands

HOUSTON -- Donald Trump addressed the horrific tragedy that unfolded at a night club in Orlando over the weekend, as well as immigration during a rally Friday night in The Woodlands.

The presumptive GOP nominee took the stage at the Waterway Marriott in front of a packed house. Before he arrived, Eyewitness News learned a man with a gun was arrested in the hotel parking garage. At this point, we don't know if that person intended to go into the rally.

During the rally, Trump mentioned the mass shooting at the Pulse night club in Orlando, mentioning that had some of the patrons been armed, it might have ended differently.

One on one with @realDonaldTrump only on @abc13houston tonight at ten pic.twitter.com/3HFx67smpJ

"If some of those wonderful people had guns strapped to their waist or strapped to their ankle and this son of a (expletive) comes out and starts shooting, and one of the people happened to have it and goes 'boom, boom,' that would have been a beautiful, beautiful sights," Trump said. "So don't let them take their guns away. We're going to save your Second Amendment."

On immigration, Trump discussed protecting our border with a wall.

"It's going to be as beautiful as a wall can be. I have to make it beautiful because maybe one day they'll name it the Trump Wall."

Earlier, Trump was greeted by a protest in River Oaks. Demonstrators lined up across the street from where Trump would be attending a fundraiser.

But Trump supporters were out in force, as well. Many were hoping to get a glimpse of the real estate mogul-turned-politician.

"Just because it's a once in a lifetime opportunity and we wanted to be part of it," said Kim Deal. "I think he's speaking to the heart of the American people. People are fed up."

She spent the night at the hotel and was outside as the first in line at 8:30am Friday. Quickly, the line grew behind her despite the oppressive heat.

"I agree with his views," said Kevin Somers, a Trump supporter who said standing in the heat was worth it. "I like his views on the border, social security, second amendment and I'm here to watch him make history."

"I want to sit out here because I want to vote for Donald Trump," said Diane Gabourel. "I believe in him and I think we need a change and I think the change is Trump. People either seem to love him or really not like him. Why do you think that is? Because he speaks the truth. He's very blunt. And he's different."

Security was tight around the hotel in The Woodlands. The Montgomery County Sheriff's Office brought in an incident command center, limited access, and put up barriers for the safety of those attending and those who might protest. Harris County deputies were there to assist. The Transportation Security Administration brought dogs for security checks. The United States Secret Service is in charge of security for the event.


Among those standing in line awaiting were John and Celena Garcia. They are twins who drove from San Antonio. Both support Trump despite much of their family strongly opposing him.

"We're both Latino Americans supporting Trump," said John Garcia. "Might be a shock for most people. We lived in Arizona for a while so we know about the crime and everything. We're for the wall. We're for a lot of policies."

"Actually my boyfriend hates me right now because I'm here," added his sister Celena. "I was like 'you can get over it'. It's weird, my mom is really against us supporting Trump."

Trump said Thursday in Dallas he expects to do well with Hispanics despite much of the opposition to his campaign comes from those who don't agree with his policies on immigration.

Trump's rally in Dallas captured between 3,000 and 4,000 people. His public event in Atlanta on Wednesday was just as large. Both did draw relatively minor protests compared the numbers of supporters who showed up for the respective rallies and compared to protests in other cities.