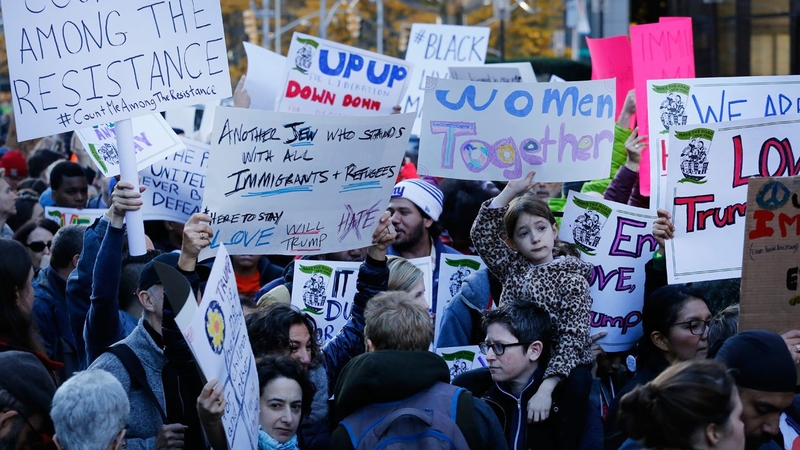 MIDTOWN, Manhattan (WABC) -- Immigrants, their advocates and others opposing a Donald Trump presidency continued to protest Sunday, speaking out against the president-elect's support of deportation and other measures.

The protest, organized by the immigrant rights organization Make the Road New York, began outside the Trump International Hotel in Columbus Circle.

Demonstrators held signs in English and Spanish, saying things like "Hate won't make us great." They chanted, "We are here to stay."

The demonstrators, growing to more than 1,000, then began marching to Trump Tower.

Kemberly Richardson was with protesters in Midtown.

Since Trump's stunning election night win, questions and fears have been mounting about whether he will make good on his controversial campaign promises.

In an interview with '60 Minutes', the President-elect talked about his priorities once he takes office. He also addressed the massive demonstrations in New York City and across the country, protesting his win.

Though Trump told CBS' "60 Minutes" in an interview airing Sunday night that his border wall might look more like a fence in spots, one thing didn't change from his primary: the combative billionaire took to Twitter to settle some scores.

During a four-hour spree, Trump gloated about establishment Republicans congratulating him and savaged The New York Times for being "dishonest" and "highly inaccurate."

"The nytimes states today that DJT believes 'more countries should acquire nuclear weapons.' How dishonest are they. I never said this!" Trump tweeted late Sunday morning.

But in a March interview with the Times, Trump was asked whether he would object to Japan acquiring its own nuclear arsenal, which it does not now have. He replied, "Would I rather have North Korea have them with Japan sitting there having them also? You may very well be better off if that's the case."

On Saturday, Trump's presidential upset win sparked a fourth day of protests across the United States, with tens of thousands of protesters marching and railing against him.

2,000 protesters took to the streets in Midtown Manhattan Saturday, marching up Fifth Avenue to Trump Tower.

But that number was down from the more than 10,000 the day after the election.

Thousands of #DonaldTrump protestors marching down 5th Ave shouting "this is what democracy looks like" #ABC7NY pic.twitter.com/g85gsNBLQR

The protesters rallied at New York's Union Square on Saturday before picking up steam and taking their cause into the street and toward Trump Tower. Fifth Avenue was crowded with protesters for blocks. Police lined both sides, following along on foot and on motorcycle, but the group remained peaceful.

The arrests, according to the New York City Police Department, were around 7 p.m. mainly near Sixth Avenue between 46th to 50th streets.