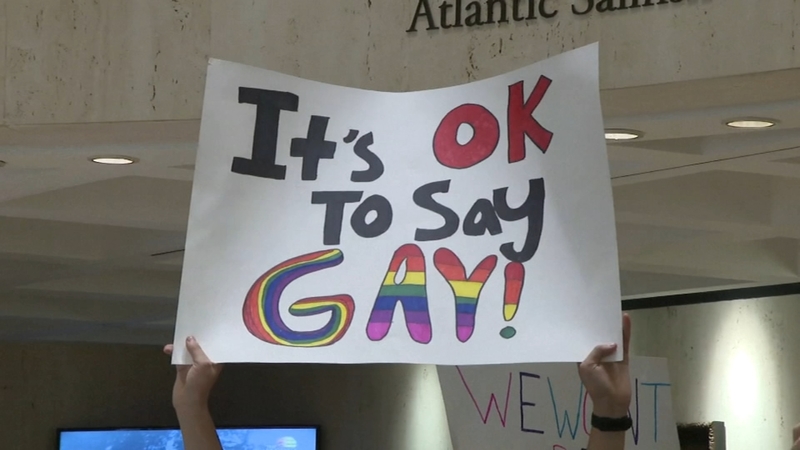 DURHAM, N.C. -- Across the country, more than 200 bills in state legislatures aim to take rights away from LGBTQ+ children and adults-particularly the transgender community.

One such bill, the Parental Rights in Education Act, passed the Florida legislature on Tuesday with a 22-17 Senate vote. Governor Ron DeSantis has signaled his support for the bill and that he intends to sign it when it lands on his desk.

Critics of the bill have called it "Don't Say Gay" because of a section of the bill that reads as follows:

"Classroom instruction by school personnel or third parties on sexual orientation or gender identity may not occur in kindergarten through grade 3 or in a manner that is not age-appropriate or developmentally appropriate for studentsin accordance with state standards."

Many fear this section will prevent honest and open discussions about all gender identities and sexual orientations in the classroom, and prohibit students from sharing if they come from an LGBTQ+ household.

Paige Holt, a science teacher at Jordan High School in Durham, North Carolina, teaches much older students but said the bill is an affront to both the ability of teachers to exercise their subject matter expertise and the ability of students to learn about the world and all of the types of people they will encounter.

"I think a lot of people assume that children, even really young children, can't talk about some of these topics because they're too complex but they are very capable of talking about what makes people different," Holt said. "It's really frustrating to be told we can't talk about certain things. As professionals, we can make those decisions about when it's appropriate, how it's appropriate to bring it up, and how to handle those conversations with our students."

Holt also leads her school's LGBTQ+ club, called Spectrum Alliance. She said in the organization, students of all sexual orientations and gender identies-including straight allies-learn about different terminology, understand the difference between different identities or types of romantic relationships, or educate one another on different aspects of LGBTQ+ history.

"That helps people either put a label on what they're feeling and find community or just to understand the world at large and have a better perspective of the diversity that we have," Holt said.

She added the club also engages in advocacy work and provides a social space where her students can feel safe to be themselves.

"In a lot of other aspects of their lives, maybe they're kind of pretending to be somebody that they're not," Holt said. "This is the support group for when people are ready to come out or have hard conversations with friends or families."

Her students are not unaware of what is happening across the country, and Holt said they're worried that similar legislation could take away their safe space in their schools in North Carolina.

"They're afraid that if they do come out, what if I have to start reporting that to their parents? Because some of them don't tell their parents they're coming to the Spectrum club, they say they're there for other school related things, just because they don't feel comfortable yet or safe to come out," Holt said. "That just takes away one more place where they can be safe."

However, Holt added that many of her students, despite being young, are already jaded to the barrage of anti-LGBTQ+ legislation in the last few years and accept it as another part of a world ravaged by a pandemic and currently in the midst of a war.

Suicide is the second leading cause of death among young people, according to the Centers for Disease Control and Prevention. The risk for attempting suicide among LGBTQ+ youth is four times higher than that of their straight counterparts. The Trevor Project, the nation's largest LGBTQ+ suicide helpline, estimates at least one LGBTQ+ youth between the ages of 13 and 24 attempts suicide every 45 seconds in the U.S.

According to Trevor Project research, LGBTQ+ youth who reported high levels of social support from friends or family or at least one gender affirming space were significantly less likely to attempt suicide. Taking away that space can have dire consequences.

Holt said a solution could be continuing to teach despite the legislation.

"Sometimes doing the right thing is more important than doing the thing that is in the rules," Holt said. "Our students need that. Even our students who are straight, cisgender deserve to know about the world and the different types of people they will encounter in the world and it's doing them just as much of a disservice to not talk about it, to not educate them about those facts of life."

She added that even though the Florida bill is not local to her school, it could provide a legal precedent.

"We want to be known as a country that is inclusive, that is working towards progress," Holt said. "It's part of our national conversation. We should be making our voices heard and giving our trust to our educators, having faith in our young people that they are mature enough to handle these age appropriate conversations in the safe space that your public school should be."