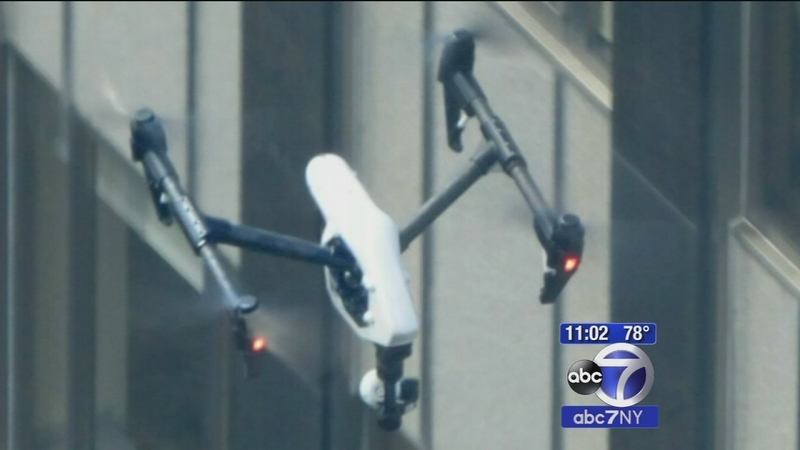 BROOKLYN HEIGHTS (WABC) -- What would you do if you looked out of your window and saw a drone with a camera staring right back at you? People in one neighborhood are saying it is happening to them, and they want it to stop.

A drone was spotted hovering along Montague Street near Court Street in Brooklyn Heights on Thursday.

"We were in our office, it's a corner office bordered by two sets of windows - our boss was like 'oh my gosh, there's a drone outside the window', so we all gathered around," says eyewitness Becca Giles.

Giles was working on the 23rd floor of 16 Court Street when she saw the drone. She says it hovered for about five minutes outside her office window, then disappeared.

"It's a little bit disconcerting that there was someone peering into our windows, but I don't think there was serious concern - probably someone with a hobby," Giles adds.

A man with what looks like a controller in his hands was seen standing on the roof of nearby 189 Montague Street. That building is closed, and under construction.

"There was actually a patient in the room. The drone was waiting at the window - it was right in front of the window. The patient was like 'what is that?'," says Harrison, "the nurse saw it and she said 'oh my god, just saw it flying around, was getting up and down windows. I think there should be laws about it. "

Sure enough, there are new FAA rules being drafted to regulate drones, including licenses, maintaining direct line of sight, speed, and not operating drones over people.