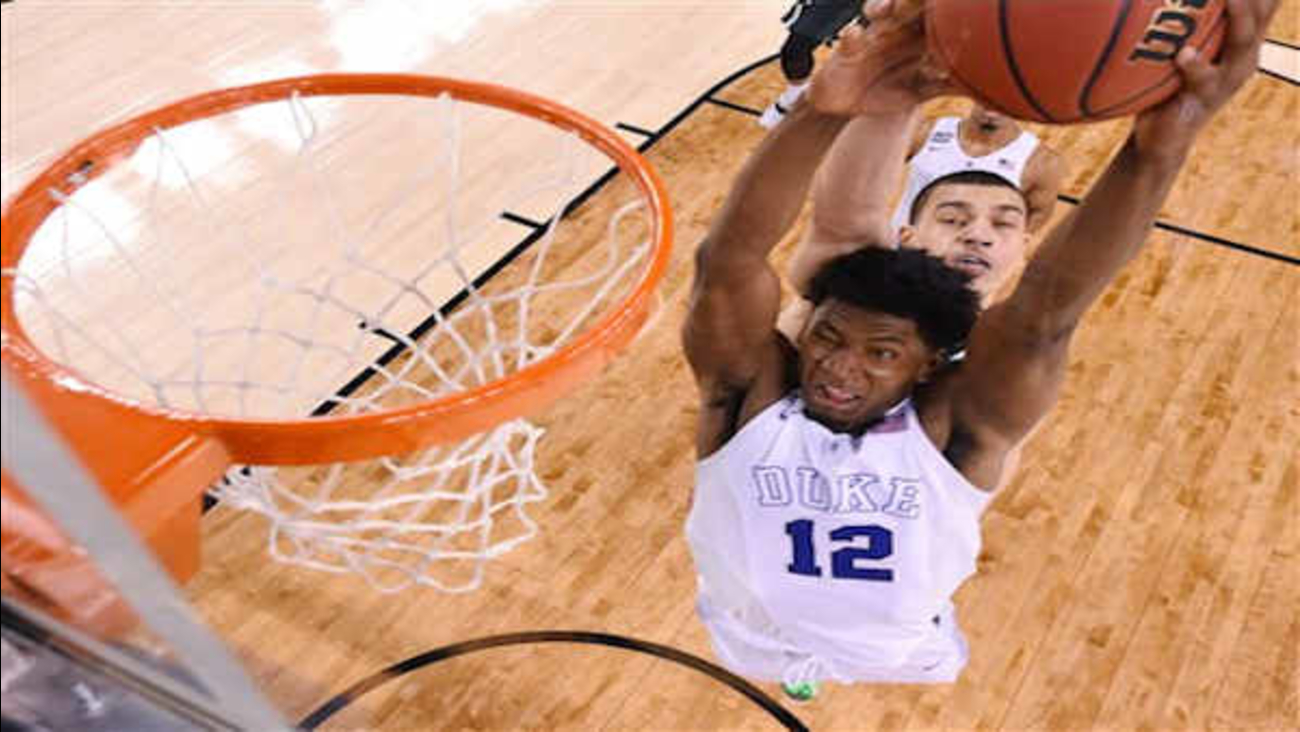 INDIANAPOLIS, Ind. -- For once, Jahlil Okafor didn't have to contend with constant double teams.

Instead, Duke's star freshman found himself with plenty of 1-on-1 opportunities in the first half against Michigan State on Saturday night, helping the Blue Devils' offense settle into a flow on the way to an 81-61 win in the opening game of the Final Four.

The 6-foot-11, 270-pound Okafor finished with 18 points on 7-for-11 shooting, and had six rebounds as part of a balanced offense in a game that belonged to the Blue Devils.

Okafor - regarded by many as a possible No. 1 overall NBA draft pick - was coming off two quiet NCAA Tournament games in Houston's South Regional, but got off to a good start in Indianapolis.

"When they're playing me with one man, my job is to dominate and then to score," Okafor said. "... We've been successful the entire year when teams play both me ways."

Duke will face the winner of overall No. 1 seed Kentucky and Wisconsin when it tries for its fifth national championship Monday night at Lucas Oil Stadium.

Okafor didn't need to have a huge scoring night, not with Duke (34-4) shooting 51 percent from the field and causing numerous problems with its ability to spread the floor and penetrate.

Still, Okafor was a big component in Duke's dominant performance.

He drew early fouls on defenders Gavin Schilling and Matt Costello to get the Spartans in some foul trouble. He ran the floor to score on a transition stick-back through a foul. And there was the frequent sight of Okafor palming the basketball as though it was a baseball, including once in the second half when he grabbed a board with his massive hands against Big Ten rebounding leader Branden Dawson.

"I mean, you could just tell," Jones said. "We've been around him so long, you can just tell when Jah is ready to play and when you just know he's going to be the best player on the court."

Okafor had combined for 15 points on 7-for-16 shooting in last weekend's wins over Utah and Gonzaga to get to the Final Four.

He said Friday he wasn't disappointed by his performance. Rather, he was excited by the prospects of arriving in Indianapolis with the chance to win a national title, and the knowledge that his team made it to the Final Four when he could have played better.

He was certainly prepared for any look Tom Izzo's club could give him, too.

Few teams tried to play him 1-on-1 this year, and instate rivals North Carolina and North Carolina State didn't just send double teams - they doubled with big men to make it tougher for Okafor to see and pass over the pressure.

He had no such trouble Saturday night. Okafor had 10 points on 4-for-6 shooting in the opening half, helping the Blue Devils gain momentum after a slow start. And he often made it look easy in the paint, even scoring on a layup while Schilling tugged at the back of his jersey.

"Whenever you can establish the inside, that frees everyone up," Duke assistant coach Nate James said. "He can't be guarded 1-on-1 - and he knows that."

Okafor's putback dunk on Justise Winslow's miss midway through the first half gave Duke its first lead at 18-16. It was part of a 14-2 run in which Okafor had half of his team's points.

Duke never trailed the rest of the way as it advanced to another title game in Indianapolis, where the Blue Devils captured national championships in 1991 and 2010.