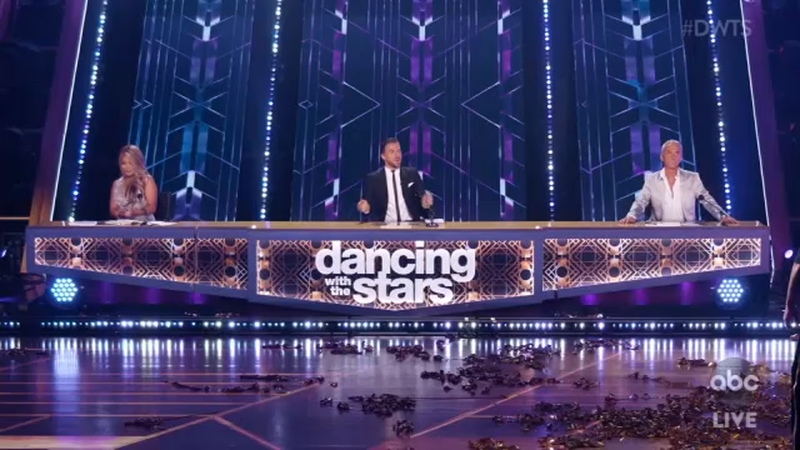 'Dancing with the Stars' returns for Season 29

The curiosity factor was high for Season 29 of "Dancing with the Stars."

How will they do it during these COVID-19 ravaged times?

The open featured all the pro dancers... one at a time, solo in the spotlight. No big group number! They weaved together a routine to "I Wanna Dance with Somebody," which seemed especially appropriate!

New host Tyra Banks made a grand entrance in a killer dress, and used her supermodel skills to walk down to the center of the very empty ballroom. No audience. Just the three judges in a completely made over ballroom.

Speaking of the judges, they've added Derek Hough to the mix. The six-time champ is filling in for Len Goodman, who is still in his native England. Carrie Ann Inaba and Bruno Tonioli are still on the panel, albeit much further apart.

The producers didn't release which pro dancer would be paired with each celebrity until the debut episode. The first meetings were part of each contestant's video package.

Here's a recap of the dances, in the order they were performed on the show:

AJ McLean - 18 out of 30
The veteran Backstreet Boy is paired with former champ Cheryl and had to learn the jive for his first routine. Derek thought it looked like AJ got shot out of a cannon (in a good way). Bruno agreed that the dance was powerful, AJ just needs to polish things up a bit in the future. Carrie Ann encouraged him to be "big," especially in a room with no audience.

Chrishell Stause - 13 out of 30
The former actress, now a reality TV star who sells real estate, admitted she has zero dance experience. That means Gleb has his work cut out for him. Week one dance: the tango. Bruno said he wished she could have a "do over," and told Chrishell to work on her posture. Carrie Ann sees potential; and Derek's coaching tip was to work on her leg strength.

Vernon Davis - 17 out of 30
The former pro football player and fulltime dad kept up the record of many former athletes and started off strong. His partner is Peta and they did a foxtrot that didn't seem like a first week dance. Carrie Ann was impressed with his stage presence, and thought he was masculine and elegant. Derek agreed, calling his work on the dance floor smooth. Bruno likes the chemistry he sees between the two.

Anne Heche - 18 out of 30
Actress Anne Heche is partnering with Keo and she is a fan of dance, and a fan of his. Their week one dance was a cha, and Derek told Anne that she, and the dance routine, made him smile. Bruno called her sparkling; and Carrie Ann thought her moves were strong and precise.

Jeannie Mai - 18 out of 30
The talk show host is a bundle of energy and from the get-go told her partner Brandon she wants to do tricks and flips... even though she has no experience! He grants her wish with a fast and fun salsa. Bruno calls her a ray of sunshine; Carrie Ann told Jeannie she lit up the room. Derek said it was a good start and advised her to watch her turns and balance.

Jesse Metcalfe - 18 out of 30
The actor who is best known for "Desperate Housewives" is now desperately wanting to learn how to dance. He's got one of the best teachers, with pro Sharna leading the way. Round one: the quickstep. Carrie Ann like the passion of the dance, but thought he might want to tame things a bit. Derek called it a great first dance, and he's a true leading man in the ballroom. Bruno said it's a tricky dance, but Jesse did it!

Skai Jackson - 21 out of 30
She's the youngest dancer of the season but she's not letting her youth get in the way of anything. Last year's mirror ball champ, Alan, will show her around the ballroom. Derek told Skai her tango routine was clean and strong, and a good start. Bruno called her a shining jewel, and of course had to say the "sky is the limit" for her. Carrie Ann thought it was an exciting first performance.

Kaitlyn Bristowe - 20 out of 30
The former "Bachelorette" has wanted to be a dancer since she was a little girl. And she literally squealed like a little girl when she learned her pro partner was Artem. They cha cha'd to a good score, with Bruno complimenting her foot placement; Carrie Ann told her to work on pointing her toes; and Derek it seemed a little safe, he wants to see more bite.

Nev Schulman - 20 out of 30
He gained fame, and taught us all about the phrase "Catfishing", but Nev is now a happily married father of two. Jenna is his partner, and the two performed an elegant foxtrot for week one. Carrie Ann called it uplifting and refined; Derek said it was pleasant to watch but be careful of his "booty"!

Johnny Weir - 18 out of 30
This former Olympian says he loves medals (and yes he has a ton) but the perfect addition to his collection would be a mirror ball trophy. He tells us he's not used to sharing the spotlight with others, but was thrilled to learn his partner is first time pro Britt Stewart. They did a cha that Bruno called a great opening, with a lyrical quality. Carrie Ann reminded them to stay connected as a couple. And Derek advised him to not overthink things and just "stay Johnny."

Justina Machado -21 out of 30
The actress came out strong and is tied for the top spot on the leader board. Sasha is her partner and they did a cha cha to the classic song "Respect." Bruno offered all of his to Justina, and loved her confidence and musicality. Carrie Ann said she bet that routine got everyone at home out of their seats and moving! Derek agreed that it was filled with energy, and power.

Charles Oakley - 12 out of 30
The former NBA great says he's all about teamwork and will do whatever his pro partner Emma can get all 6'9" of him to do. They do a salsa and the judges did their best to soften the blow for a not so wonderful routine. Carrie Ann advised Charles to listen a little more closely to the music. Derek said while Charles was a bit flat footed, he could feel his enjoyment.

Monica Aldama - 19 out of 30
Her day job involves being a tough coach to a group of top notch cheerleaders; now, Monica is the one being coached, by one of DWTS's top pro dancers, Val. Their first dance is a foxtrot and the judges are impressed. Derek loved their frame, Bruno thought they looked stylish and elegant, and Carrie Ann was impressed that Monica "went for it."

Nelly - 16 out of 30
If you wondered how long it would take someone to say "It's getting' hot in here" the answer would be right away. Nelly's pro partner, Daniela, got that phrase out of the way for the season! The duo did a salsa for week one; Bruno thought he saw nice hip action and fun interplay; Carrie Ann liked their groove, and Derek told Nelly to lose the sneakers and wear dance shoes and things would be easier!

Carole Baskin - 11 out of 30
The woman we all came to know from the Netflix series "Tiger King" wants to be queen of the ballroom and its Pasha's job to get her that crown. Their first dance was a paso doble to, of course, "Eye of the Tiger." Though their scores weren't high, the judges offered encouraging words about their connection and effort.