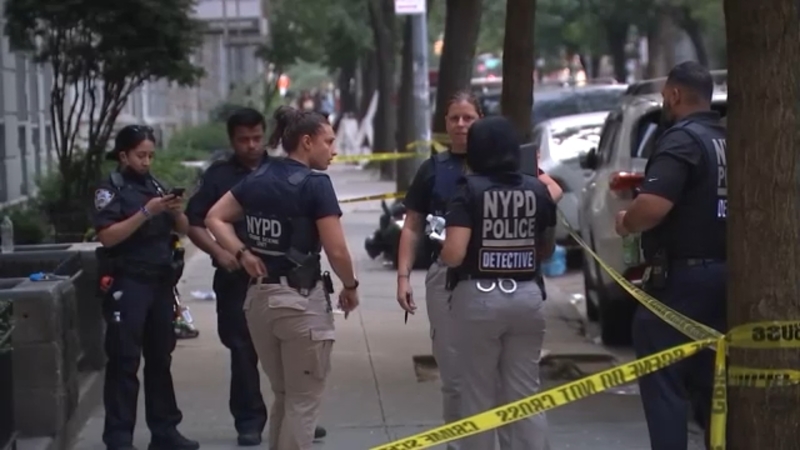 More shootings across NYC amid rise in gun violence

EAST FLATBUSH, Brooklyn (WABC) -- Disturbing video shows a young man take aim at a man on a Citi Bike and shoot him point-blank in Brooklyn.

It happened on Wednesday at 2:20 p.m. outside of a store on Clarkston Avenue and East 53rd Street in East Flatbush.

Simeon Pierrot, 21, was shot multiple times in the torso and one time in the left forearm. He lived just one block away from the scene of the shooting.

He was rushed to Kings County Hospital where he was pronounced dead.

The deadly shooting comes as six other people were shot within two hours in Brooklyn Thursday night, including a triple shooting outside a pizzeria in Bergen Beach.

At 9:47 p.m. a 25-year-old man was shot in the buttocks in front of 1116 Putnam Avenue in Bushwick. He was taken to Brookdale University Hospital.

Then at 10 p.m., a 42-year-old man was shot in the left arm in front of 609 Nostrand Avenue, at Bergen Street, in Crown Heights. He was taken to Kings County Hospital.

Less than an hour later at 10:42 p.m., three teens ages 17 to 19, were wounded when gunfire erupted outside a pizzeria at 2351 Ralph Avenue in Bergen Beach.

Just before midnight at 11:46 p.m., a 27-year-old man was shot in the leg in front of 4111 Church Avenue, in East Flatbush. He was taken to Kings County Hospital, and there are no arrests in that incident.

That made for a total of seven shooting incidents with nine victims in New York City on Thursday.

All of the cases include young people with guns and most of them are gang-related.

Pastor Gil Monrose has worked in his Brooklyn neighborhood for 16 years, but said the last few months have been awful.

"Got ordained in 2005 at this church and I never believed I would do more funerals than weddings, ever," Monrose said.

Monrose has worked with the governor and mayoral candidate Eric Adams and is hopeful their alliance will make a difference. He has also worked with police on gang intervention and is grateful Gov. Andrew Cuomo announced more summer jobs this week.

But he says community leaders, the mayor and police must do more.

"Everything makes a difference, there is no one way, I'll say right now there's one way to get us out of the situation that we're in, it has to be everything on the table," he said.

On Friday, there were more reports of shootings across the city.

A 32-year-old man was shot in the head around 4 p.m. in Harlem and was taken to the hospital where he was pronounced dead.

Harlem resident Raj Ramdath knew the man who died, and wonders if something in his past caught up with him.

"He grew up in this neighborhood. So you don't know what happened throughout his past, that we don't know about," Ramdath said.

Around the same time a man was shot in the leg outside the Astoria Houses in Queens after 4 p.m. He was taken to the hospital but was said to be stable.

Comedian Gabriel Iglesias announced that he has been diagnosed with COVID-19, despite having been previously vaccinated for the disease.