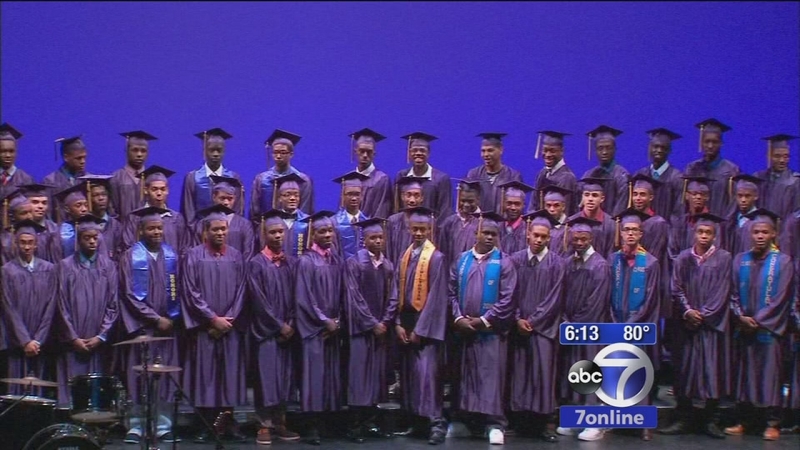 Special graduation day at school in the Bronx

NEW YORK (WABC) --
It's a momentous day in any student's life, but for the students at the Eagle Academy in the Bronx, Wednesday's graduation was extra special.

Many have overcome fierce obstacles to get to graduation. And now that they have their diplomas, the future is looking very bright.

Hasan Mitchell crossed the stage to accept his diploma, no sign of the crosses he's had to bear far beyond the classroom.

"Being on my own, making my own decisions, it's hard, it's difficult but I'm looking forward to the challenge," he said.

Hasan was adopted by his grandmother, doesn't know his father and spent time in foster care because of his mother's drug problems. He has traveled two hours to and from school each day.

"I've been through a lot and it's kind of surreal that I see the end result that I made it through. I think I'm resilient and I made it, so that's the best part," Hasan said.

Hasan is one of 75 students who graduated from the Bronx campus of the Eagle Academy for young men, a school founded ten years ago to boost graduation rates for minority men.

"There's so many people, when they think of young African-American men and Latino males, they think of it through a negative prism. But here we know how great they can be," said David Banks, the president and founder of Eagle Academy.

Wednesday marked the first class where all the graduating seniors have been accepted to college, including Brenton James, the first Eagle Academy grad now bound for the Ivy League. He starts at the University of Pennsylvania in the fall, one of the 21 colleges that accepted him.

"As much accomplishments as I've done today, I've done it because of these people. My friends, my family, my teachers, I just want to say, wherever we go, we have to stay in contact and help each other succeed in life," Brenton said.

The young men in this school have not only shattered the obstacles in their lives but continue to shatter stereotypes as well.

"To see that we have people going on to college, graduating from college, getting great jobs and supporting families, that's amazing and defies stereotypes in many ways," Hasan said.