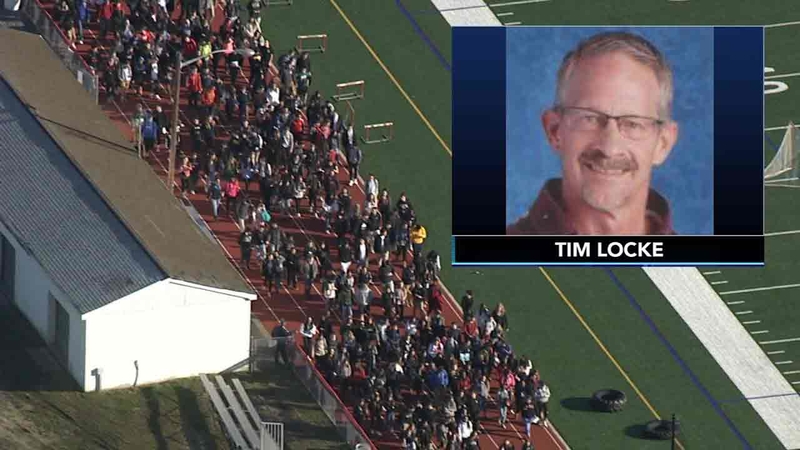 CHERRY HILL, New Jersey -- Students from Cherry Hill High School East staged a walkout on Tuesday morning in response to the suspension of a beloved teacher.

Principal Dennis Perry had threatened to suspend those who participated.

Students and parents say history teacher Timothy Locke was simply talking about security concerns in the wake of the massacre in Florida and they want him brought back.

In addition to the walkout, a rally was held Monday morning at the high school to demand the teacher's immediate reinstatement.
EMBED More News Videos

Perry placed the history teacher on leave last week after a student became upset over Locke's discussion about his concerns that a similar incident to the one in Florida could happen at their school.

"He was bringing up current security issues at East and talking about the lack of safety here," said junior Taryn Runell.

Other students pointed out that the discussion Locke was having was a valid one, not only in fact, but in principle.

"If we don't have the right to talk about the controversial issue in our school system, then how are we going to move forward as a society, let alone a school system," said senior Adam Kriesman.

Locke, who was unavailable for comment on Monday, is a 59-year-old Iraq War Veteran who served in the Air Force. He tells parents, not only was he suspended, his bag was searched for weapons and he was also ordered to undergo a psychiatric evaluation.

"The idea of requiring him to take a psychiatric evaluation, it seems that they're trying to twist this around now and use this against him," said parent Eric Ascalon. "It's disgusting."

The school district superintendent declined to discuss the situation. Meanwhile, the matter does not appear to be going away.

"A lot of what the school here is doing is trying to shut out what happened in Florida, instead of saying 'this is what we have to do, this is what we're going do next,' how we can fix what we are doing," said sophomore Debbie Goldberg.

Some students are signing petitions to bring Locke back.

"Mr. Locke, if you're watching, we got your back," said senior Justin Prechodko.

The teacher's union did not offer commentary on the matter.