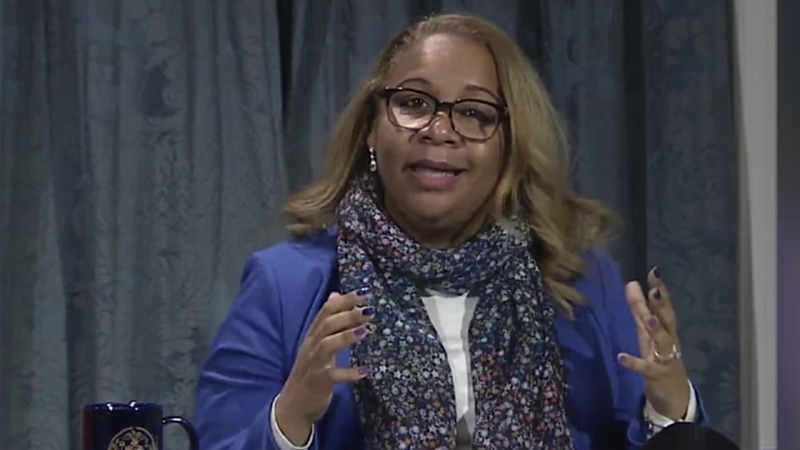 Fifth-grade students Annabri McCloud and Maliyah Bell served as "docents" and tour guides for the new chancellor. Strung across the wall was a banner with Chancellor Porter's name written in glittery red letters, reading "Welcome Chancellor Porter, dream it, believe it, achieve it."

Chancellor Porter thanked the employees at the school for their work during the pandemic.

The fifth-grade tour guides presented Porter with two gifts to mark her first day, and the historic first appointment of a Black woman as chancellor.

The second gift was an original poem written for Porter. It celebrated her for "being a trailblazer, and showing us what we can do, Like Kamala Harris, Mae Jemison and Maya Angelou."

"You inspire us to meet our goals, You challenge us to fulfill our souls."

Porter told them the framed copy of the poem would be the first item she'd place in her new office at Tweed.

The 20-year Department of Education veteran replaced Richard Carranza who abruptly stepped down. His last day was Friday.

In a parting letter, he gave his blessing to the new leadership.

Sunday, on Up Close with Bill Ritter, Porter said returning to in-person learning is a priority, but it's not going to be the same as before.

"Our reopening plan is not just about academics, of course, we are schools so that's what we do, but it's also going to be about how we wrap ourselves around the social and emotional needs of our students, how do we address the trauma we've all experienced, but also how do we engage our students in a curriculum in which they see themselves?" Porter said.

Some high school students return to in-person learning next week, and the goal is to have everyone back in a classroom by the fall.

She is a New York City public school graduate, a 20-year veteran employee, who has led at every level in the system. Porter will be the first Black woman to serve in the role.
EMBED More News Videos

"As a lifelong New Yorker, a product of our City's public schools, and a career educator, it is the honor of my lifetime to serve as Chancellor," said Incoming Schools Chancellor Meisha Porter. "Mayor de Blasio and Chancellor Carranza have laid an incredible foundation for me and I am ready to hit the ground running and lead New York City schools to a full recovery."

As Bronx Executive Superintendent, she led community school districts 7-12 and New Visions Affinity schools, covering the entire borough's 361 schools and 235,448 students. She started her career as a youth organizer in Highbridge and joined the Department of Education (DOE) as a teacher at the Bronx School for Law, Government, and Justice, a school she helped conceive and found. After 18 years at the school, where she became Principal, Porter spent three years as Superintendent of District 11, which served the Pelham Parkway, Eastchester, and Woodlawn neighborhoods of the Bronx.

Porter has been Executive Superintendent since 2018, and has overseen the largest gains in graduation rates of any borough in that time, from 67.4 in 2018 to 73.0 - a 5.7 percentage point increase, as compared to a 2.8 point increase citywide. Postsecondary enrollment in the Bronx has also had a substantial increase under her tenure, with 54.9% of the 9th-grade cohort for the Class of 2019 enrolling in college, a 1.2 increase from the Class of 2018.
In addition to previous roles within the DOE, Porter has also taught at CUNY as an adjunct professor and been a Columbia University Cahn fellow, an Aspen Institute fellow, and a member of the Harvard University National Institute for Urban School Leaders and the Fordham University - Carnegie Foundation iLead team. Porter has also received the National Association of Negro Women Sojourner Truth Award, Mercy College honorary degree and multiple state and local recognitions.