KGO
By by Leslie Brinkley
BRENTWOOD, California -- An 18-year-old U.S. Army Reservist finally got his high school diploma Monday afternoon after the principal banned him from walking in his graduation ceremony last Friday for wearing his military uniform.

Hundreds of well-wishers saluted a young man at what amounted to a substitute graduation ceremony.

Harland Fletcher was told he couldn't wear his military uniform at his real Liberty Union High School graduation ceremony last Friday. His principal insisted he had to wear a cap and gown.

"Legally, this is the uniform," Fletcher said. "It's perfectly acceptable at ceremonies like this, I can wear this uniform...They told me no, and I told him I can't deface the uniform like that. I can't wear something over this and hide it. This isn't something that should be hidden."

The superintendent later issued an online apology. On Monday, the principal apologized publicly.

"I deeply regret what occurred," Liberty High School principal Patrick Walsh said. "And I thought I needed to do two things in my life. One, apologize, and two, try to find a way to make it better."

Veterans of the Army, Air Force and U.S. Marines and Coast Guard came out in uniform to honor Fletcher for standing his ground, as he finally got his diploma.

The young man's goal is to make sure that other high school students aren't stopped from walking in their graduation ceremony because they are wearing a uniform.

Though the school district promises to revise their graduation policy, Fletcher has not yet ruled out a lawsuit.

Huge support in Brentwood for Harland Fletcher who was banned from walking in graduation in Army uniform #abc7news pic.twitter.com/ljmWUh2HoE

Harland Fletcher GOT his diploma and an apology while wearing his military uniform proudly in Brentwood. #abc7news. pic.twitter.com/4oF179zNfx 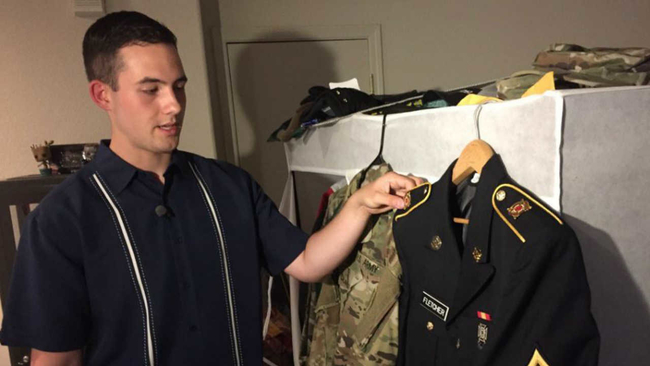