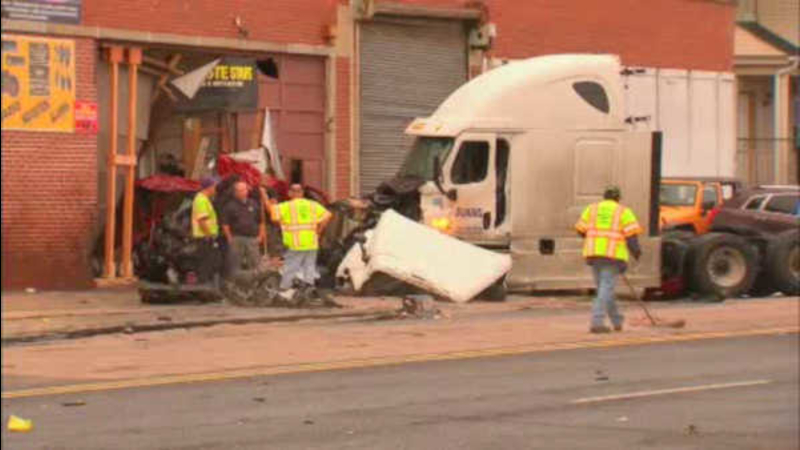 ELIZABETH, New Jersey (WABC) -- One person is dead and another in custody after a tractor-trailer crashed into about a dozen cars in Elizabeth.

The crash was part of a wild chase that left behind a devastating path of destruction and loss. The driver of that truck is in police custody, facing some very serious charges, while a mourning family is left with the burning question of 'why?'

Eyewitnesses say the collision echoed like thunder, and what followed was worse than any natural disaster - twisted and mangled metal, shattered pieces of cars, and a young man lying lifeless in the middle of the road.

"I heard a loud explosion. After the loud explosion, the police came. We all came outside and thought it was something big. We saw the car all mangled up, and what looked like dead people," says Beomel Jimenez.

Prosecutors say 57-year-old Danny Clyde Burnam was behind the wheel of a tractor trailer Friday night, and was driving erratically when he struck a car near 1st Street and Elizabeth Ave. around midnight. Burnam then sped off and drew the attention of an off-duty Union County police officer who attempted to pull him over, and fired a shot during the exchange.

Burnam continued to speed down North Broad Street, where police set up a barricade near Parker Road, and officers there fired more shots, striking Burnam. Still, Burnam slipped through the barricade, and drove head-on into another vehicle on North Ave and Newark Avenue, killing a man, and injuring two others inside the same car.

"I heard a gentleman inside the car say 'can you please help my brother?' at that point, the fire trucks were coming down the street - they proceeded to help the guys out," says eyewitness Rolando Rodriguez.