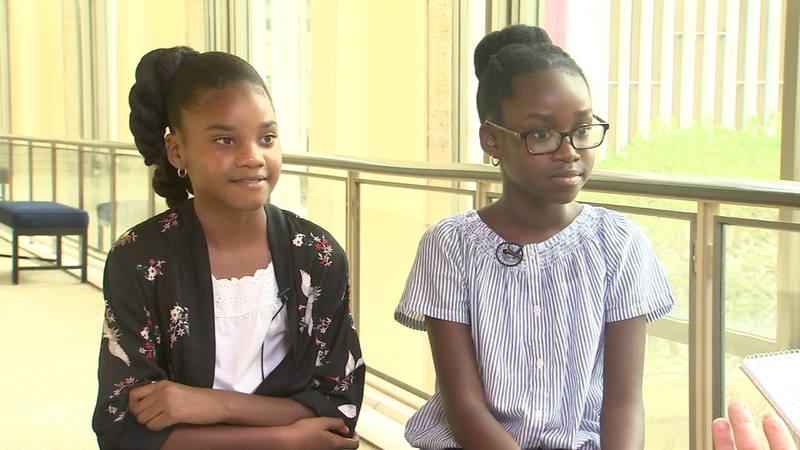 UPPER WEST SIDE, Manhattan (WABC) -- They may seem like your typical middle school girls, but these two 11-year-olds play two instruments and composed original music for one of the world's greatest orchestras at Lincoln Center.

Brooklyn residents Camryn Cowan and Jordan Millar had a unique opportunity this past summer when the New York Philharmonic Orchestra played music they had composed.

The classical music critic for The New York Times praised their work, and a headline in the paper called them "awesome." But it took a while before they felt they belonged within the walls of David Geffen Hall.

"It was a little too fancy for me," Cowan said.

The two preteens write classical music, as part of a program run by The New York Philharmonic Orchestra, in cooperation with more than a dozen schools in our area.

"The Very Young Composers Program is very special," Cowan said. "Because it's a way for me, like I said, to express myself in different ways using music and my creativity."

"The great thing about this is that it encourages musical abilities, regardless of your background or experience," Millar agreed.

Millar was inspired to write her composition called "Boogie Down Uptown" by The Harlem Renaissance of the 1920s, as depicted in the Disney animated movie "The Princess And The Frog."

Both girls had the pleasure of hearing their music performed this summer in Central Park as their proud parents looked on.

"It's amazing," Cowan said. "It's really nerve wracking, but exciting just to know The New York Philharmonic is actually playing your piece."

Both said they see themselves as leaders.

"Not many people of color have that many opportunities as I do right now," Cowan said. "So I'm just trying to set the standard to show everyone that they can do it if they put their minds to it."

The girls even got to suggest changes in rehearsal and give notes to the conductor.

"It was mostly like little corrections," Millar said. "Like add a glissando here and make one section an octave higher."

The girls said they were reluctant to speak up at first, but they were encouraged by the adults to give feedback.