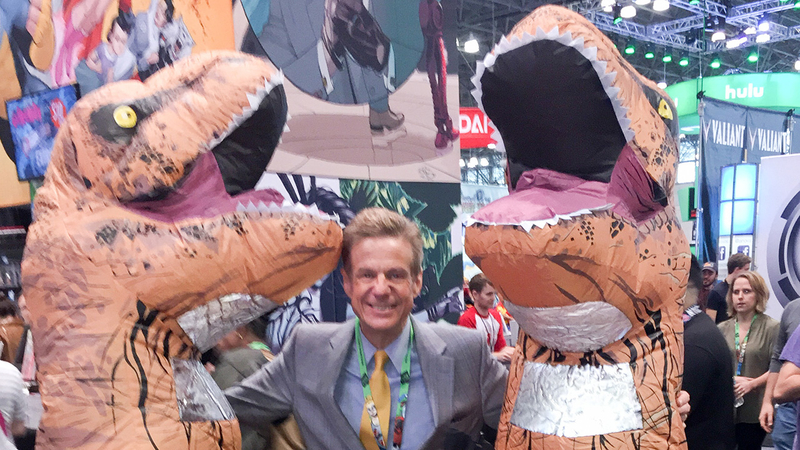 NEW YORK (WABC) -- New York Comic Con is taking over the city as thousands of die-hard fans converge on the Javits Center to meet movie and TV stars, greet artists and snap up the latest comics, books, toys and other goodies.

There are signs at the venue urging fans to "please help prevent gridlock," and the warning is warranted. Seeing so many people in costume, one might conclude Halloween had come early this year.

But for kids, Comic Con is more like Christmas.

"We started early, about 1:30 in the morning, and it's one of those things like waking up for Santa Claus," con-goer John Fair said. "You want to be able to explore the horizons and express yourself."

Fair hails from Manhattan and brought his kids to the convention.

Fans like Daisy come first at Comic Con, say organizers, which is why so many have to be at the Javits Center on opening day.

Brooklyn's Luis Pena III said the convention is a chance for him to preview upcoming movies and TV shows.

"You get to meet some of the actors, some of the artists," he said. "It's just a really cool place to see a lot of unique things that you don't really to get to see."

Pamela Yudlowitz, from Dyker Heights in Brooklyn, brought her mom to the convention.

"It's like our 15th time coming today, so it's a nice experience," Yudlowitz said.

Her mother, Maria Yudlowitz, said the coolest part of the convention is "just being around other nerds."

There is an opportunity to buy all sorts of merchandise at the convention.

Some of the stuff is pretty pricey, like a Chevy Corvette with Wonder Woman painted on the door. But, you don't necessarily have to pay-to-play.

We found John Sazaklis, a writer and designer of Marvel children's books, answering trivia questions in the Marvel Booth.

"There are a lot of people who can relate to the underdogs, the good versus evil, and I'm thinking it's something that we need right now," he said.

Comic Con is a community.

"It's a community of like-minded people kinda geeking out about random things," Brooklyn resident Colleen Vincent said. "But it's a lot of fun."

Vincent is proof that not everybody comes to the event to buy or sell stuff. She represents The Hero Initiative, a charity that helps older comic book writers and artists -- men and women that often weren't fairly paid for their work in the past. Some have fallen on hard times, and the charity has raised almost $1 million to help them.