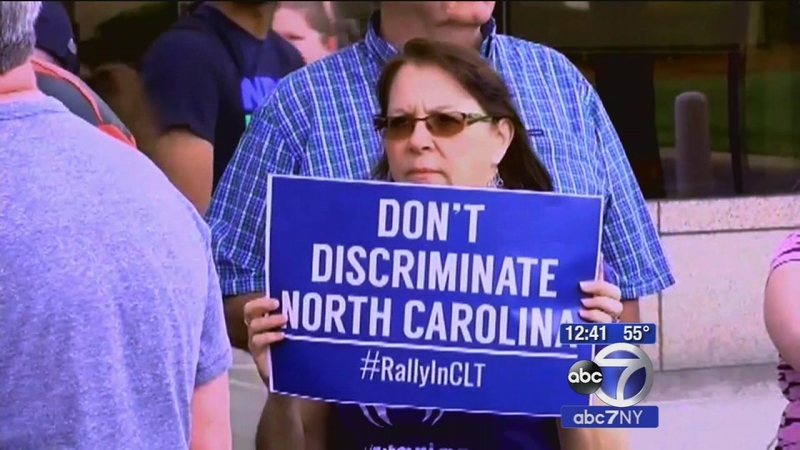 GREENSBORO -- Dueling demonstrations are expected Monday near North Carolina's Capitol by supporters and opponents of a law that limits anti-discrimination policies for lesbian, gay and transgender people.

In what could be the largest rally yet in support of the law, the North Carolina Values coalition has invited clergy, businessmen and an author to address people who think the state's Republican leaders have done the right thing. Smaller prayer vigils have been held in several cities by supporters of the law.

Meanwhile, a group that wants to repeal the law, "Triangle Families against HB2," said it plans to read eulogies of transgender people who have faced violence and discrimination. Both rallies are scheduled for noon Monday on or near the old Capitol grounds.

Others including the Rev. William Barber, president of North Carolina's NAACP branch, also have threatened civil disobedience later this month if the law isn't repealed.

Barber, known for past headline-grabbing protests that included hundreds of arrests at the Legislature, called for a "mass sit-in" when the legislative session starts on April 25 if the law isn't repealed before then. A separate group of clergy representing the LGBT community has announced they would also take part in civil disobedience if the law isn't repealed.

The rallies come while vocal national opposition to the law continues. Business executives are urging Gov. Pat McCrory and legislators to repeal the law. Bruce Springsteen canceled his Greensboro concert Sunday because of the law.

The state law was passed after Charlotte adopted a non-discrimination ordinance allowing transgender people to use public restrooms in line with their gender identification.

Conservatives have championed a provision that requires transgender people to use public restrooms that match the sex on their birth certificate, saying the law protects women and children from men who would use anti-discrimination measures as a pretense to enter the wrong restroom.

On Friday, Bruce Springsteen and the E Street Band canceled their North Carolina concert because of the law, said guitarist Steven Van Zandt, calling it the kind of legislation that's like an "evil virus" spreading around the U.S.